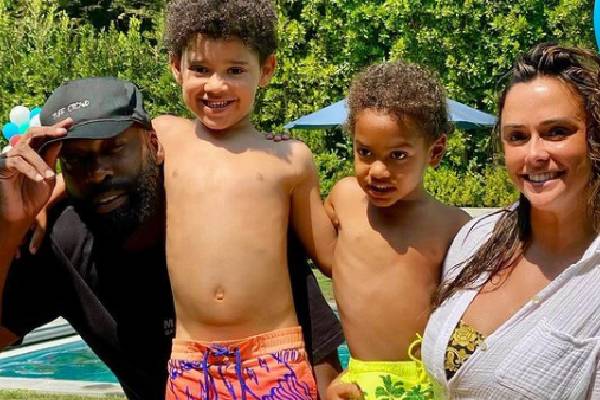 Born as Baron Walter Louis Davis, Baron Davis, is a former basketball player. The popular NBA player is also a studio analyst for the NBA on TNT, a branding used for National Basketball Association games.

Besides being a professional basketball player, Baron is also a family man. He is a doting father of two kids, Kingman Davis and Luke Alden Davis, with his ex-wife, Isabella Brewster.

Here let us talk about Baron Davis’s son, Kingman Davis, and his whereabouts.

The former NBA player Baron Davis and his ex-wife, Isabella Brewster, welcomed their first child, Kingman Davis in 2014. Baron took to his social media pages to share the news of his little one’s arrival. The ex-lovers named their eldest kid after Baron Davis’ maternal grandfather.

The ex-pair got married over the weekend on Jan 31, 2014, in a secret ceremony with only a few family friends. Isabella And Baron announced that they were expecting a baby on April 13, 2014, only three months after their marriage.

The newest addition to the Davis family came in the form of Luke Alden Davis. Born on January 10, 2016, Luke Alden Davis is the younger brother of Kingman Davis. Luke got his name after his paternal grandfather.

The NBA All-star shared the news about expecting a baby for the second time on August 19, 2015, through an Instagram post. The ex-couple welcomed their baby to this world and was showered with warm wishes on social media by the fans.

Baron Davis’ sons are fond of spending time together. Being the eldest one, Kingman seems to be taking good care of his younger brother and carrying out the big brother’s responsibilities. Both of them are also very active kids and maybe we might see the Davis brothers following in their father’s footsteps and playing in the NBA.

Kingman’s mother, Isabella, is a beautiful and bold lady with love for her works and family. She was a talent agent at the Creative Artists Agency. According to some online sources, she resigned from CAA in mid-2012. The former agent currently works in the membership-based group Alliance Of Moms (AOM). This alliance assists pregnant and parenting teens in LA.

Isabella completed her Bachelor’s degree in Political Science and Government from the Georgetown University in 2004. According to her Linkedin Account, she also worked as a producer at No Label Productions, founded by her ex-husband, Baron Davis. As a producer, Isabella had helped No Label produce content for top entertainment companies. She has produced for Disney, Comedy Central, Sony, Hulu, and many other media.

She is not the only lady with a fine career but is also the best mother every child dream of. Since her two son’s birth, she is giving a significant amount of time to the kids. We can also see the mother-sons trio having lots of fun and creating good memories together. And while there is a big chance of Baron Davis’ son following in his father’s footsteps, who knows Kingman might surprise everyone and pursue a career in the entertainment industry.

According to TMZ, Isabella had also sought primary physical custody but joint legal custody, which means that Baron Davis will get to visit his kids. She also sought an unspecified amount of spousal support and wanted Baron to cover her legal costs.

The split has not made the relationship between the ex-lover unpleasant. Baron still posts photos with his kids and ex-wife on Instagram and he did the same for Valentine’s Day too. The Brazilian-American Isabella’s Instagram page is also full of photos of her little ones. Brewster never forgets to capture her sons’ happy moments and keep them secure on her social media handle’s walls. The ex-partner also constantly upload pictures together with their offsprings on social media handles.

The English origin name Kingman is a masculine name that means King’s man.