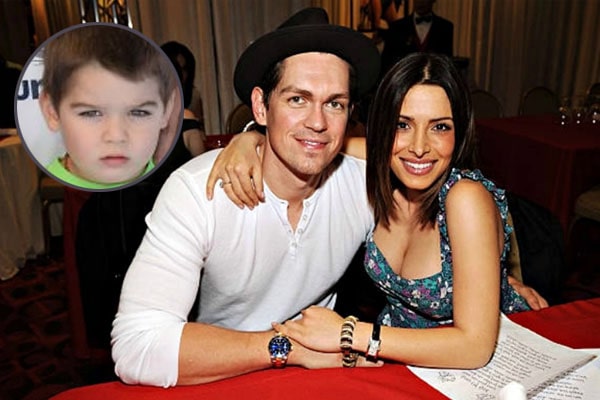 The Iranian-American beautiful actress, Sarah Shahi is married to Steve Howey, an American actor for around ten years. The couple met in 2004, engaged in 2007 on vacation in Hawaii, and got married after two years in 2009. The couple is blessed with three gorgeous children; William Wolf Howey and twins, son Knox Blue Howey and daughter Violet Moon Howey. The first child of Sarah, William, was born in July 2009, and the twins were born on March 1, 2015.

Knox Blue Howey is a baby born to talented actor parents. Mommy Sarah Shahi is well known for her TV role in People of Interest, while Papa Steve Howey is well known for his role in Shameless. With both parents being on the silver screen for such a long time, they have successfully been able to give time to their kids.

Furthermore, Sarah Shahi’s son, Knox Blue Howey, has appeared on movie premieres and magazine covers along with his parents and siblings.

After baby Knox was born, both of his parents were busy at work. His mother Sarah was filming People of Interest in New York City, and father Steve was filming Shameless in Los Angeles. The twins were with Sarah, and the eldest William was with Steve. Even though they all were in different places, they grew only stronger.

Steve Howey said in an interview with People Magazine that they made a routine. It was not ideal. However, they made it work out through communication. The twins, Violet and Knox, really rebonded the bond of their parents.

Influence of A Documentary

When Sarah was pregnant with Knox and Violet, the couple decided giving birth at home after watching the documentary called The Business Of Being Born. So, Sarah’s twins got delivered at home with the help of hubby Steve and a mid-wife.

Sarah’s twins, Knox and Violet were delivered healthy despite not being operated under professional health care.

Not A Steve or Michael

Papa Steve revealed in an interview with People magazine that the naming process is always tricky. Even if they come up with several names, it’s not always likable to both parties. However, they would never name their son ‘Steve’ or ‘Michael.’ After many name deciding trial, they came up with ‘Knox’ and father Steve called it old-timey.

We can see how close Knox is with his parents and siblings. We hope that Sarah Shahi’s little champ, Knox Blue Howey grows up to be a healthy and happy boy

The name Knox is of Scottish origin, meaning round hill.