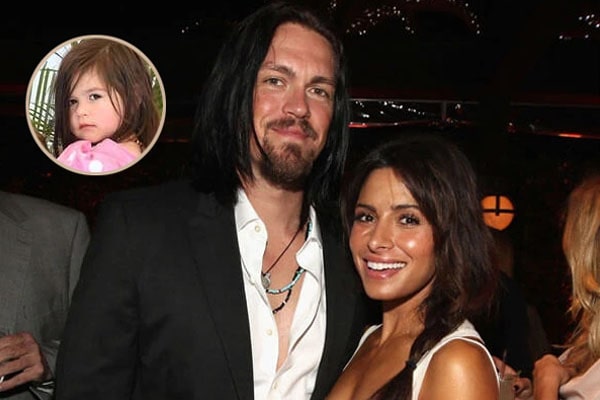 Sarah Shahi has a daughter named Violet Moon Howey whom she had with her partner Steve Howey. Image Source: Pinterest.

The actor couple, Sarah Shahi and Steve Howey have been in a marital knot since 2009. The couple has been in a  strong relationship for such a long time, they have been gifted with three children. Their eldest son is William Wolf Howey, and the youngest are twins, daughter Violet Moon Howey and son Knox Blue Howey. The twins, Violet Moon Howey and Knox Blue Howey were born in-home on 1st March 2015. Among the twins, Violet is older than Knox by two hours.

Sarah Shahi’s daughter Violet is the granddaughter of Bill Howey, a film director who has been teaching and coaching acting for over thirty years. According to Steve Howey, Sarah was under the supervision of his father-director Bill Howey. Well, let’s know more about Sarah Shahi’s baby girl Violet Moon Howey.

Our sweet Violet Moon Howey has great parents, Sarah Shahi and Steve Howey, who have showcased a strong bond. Both of the parents are actors and usually busy with filming. However, they always take out time to spend time with their children.

The couple has undoubtedly proven that family should be a top priority, and no matter how busy you are with your job, we should always take out time for the family.

The cutie Violet attends movie premiers with both of her parents and siblings number of times. Sarah Shahi’s daughter Violet seems to be always with her family members and enjoying the company.

We can see how close the family of five is with each other. The bond of the family is beautiful and very strong.

Sarah Shahi was born to an Iranian father and a Spanish mother. She was close to her mother than her father as some awful things happened in her family. So, when her twins were born, she wanted to name her daughter something related to her mother.

Later the couple decided on ‘Moon’ as the middle name, which is the translation of Sarah’s mother’s name. Violet is named after a color and her Abuela.

After the twins were born, Sarah Shahi took the twins and went to New York City for the filming of People of Interest, and Steve Howey stayed in Los Angeles with William for the filming of Shameless. Even though the family was apart due to work, they only grew stronger. The parents, Sarah and Steve, revealed in an interview with People Magazine that they made all the distance work out through communication.

Violet, like her name, she colored the family with her presence. We wish Violet all the good luck for her future and hope that she grows up happily and beautifully.

The name Violet is of Latin origin, meaning love; faithfulness.