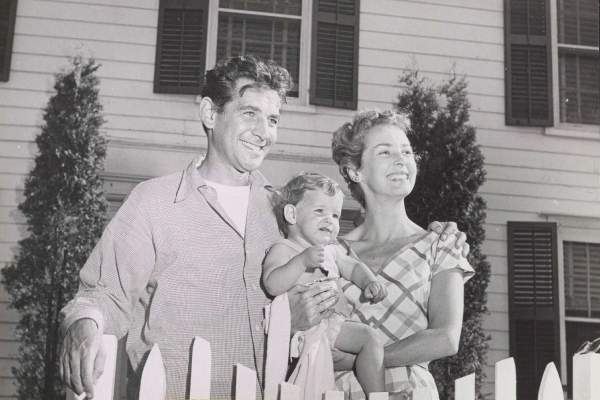 Sadly, we lost the legendary conductor to a heart attack caused by mesothelioma on October 14, 1990. He is survived by his three kids, Nina Maria Felicia Bernstein, Jamie Bernstein, and Alexander Bernstein. For today, we will learn about Leonard Bernstein’s daughter, Jamie Bernstein in this article.

Born As The Eldest Child

Jamie, whose full name is Jamie Anne Maria Bernstein, is the firstborn child of the composer and his wife, Felicia Montealegre. The latter was a Chilean-American pianist and actress born in San Jose, Costa Rica. The couple married in 1951 and stayed together until Felicia’s passing in 1978. Sadly, she died of lung cancer on June 16 of that year.

Nonetheless, Jamie was welcomed on September 8, 1952, in New York by her parents after a year of their marriage. After about three years, on July 7, 1955, Felicia gave birth to her little brother, Alexander Bernstein. Then, about seven years later, on February 28, 1962,  Jamie’s youngest sister, Nina Maria Felicia Bernstein, was born.

Leonard Bernstein’s only son, Alexander, has studied acting, performed professionally, and worked as a production associate. He is now the president of Artful Learning, Inc., and vice president and treasurer of The Leonard Bernstein Office, Inc. Likewise, Nina is a former actress who worked in the industry for several years. At present, she is working as a food educator in neglected communities.

Leonard Bernstein’s baby girl is a writer, narrator, broadcaster, and filmmaker. Inspired by his lifelong urge to share and teach, she has come up with several ways of communicating her love and excitement about orchestral excitement with others.

Jamie has traveled to numerous parts of the world as a concert narrator who speaks on musical topics. She has presented talks at conferences in Japan and seminars at Harvard University. She also narrates en español in Spanish-speaking places like Madrid, Sevilla, and Caracas. As a broadcaster, the narrator has produced and hosted radio shows and broadcasts in the US and UK.

Furthermore, the filmmaker co-directed the film documentary, Crescendo: the Power of Music, which has been awarded numerous prizes on the festival circuit. She also directed her father Leonard’s chamber opera titled Trouble in Tahiti in various locations around the country.

As a writer, Jamie has her memoir called Famous Father Girl published in June of 2018. She also performs an audiobook of her memoir. In addition to being an author, Leonard Bernstein’s daughter also writes articles and poetry. Many of them have made their appearances in various well-known publications. She also edits a newsletter about issues and events concerned with her father’s legacy named, Prelude, Fugue & Riffs.

Is A Devoted Mother

The 70-year-old married her ex-husband, David Thomas, on December 2, 1984. However, it appears the marriage between the two did not work as the former couple eventually parted ways in 2000. Nonetheless, before they divorced, the one-time pair welcomed and now share two grown children.

Jamie Bernstein’s eldest is a daughter named Frankie Jay Thomas, a writer who has been accepted by the prestigious Iowa Writers Workshop. She is also in a blissful marital life with her husband, Ian William Tattersall. Her spouse is a dermatologist by profession.

Likewise, Evan Thomas, who is younger than his sister by three years, is Jamie’s youngest child and son. As per his LinkedIn profile, Evan has been working as an Office Assistant at The Leonard Bernstein Office for over 16 years since 2006.

Furthermore, there is an upcoming movie based on the life of Leonard Bernstein Maestro, co-written, and directed by Bradley Cooper. Cooper will also star as the legendary composer in the film. The role of Leonard Bernstein’s daughter will be played by none other than Maya Hawke. Nonetheless, it seems that Jamie is leading a happy life. We wish more happiness in her and her loved ones’ lives.

Jamie is of Hebrew and Scottish origin for both genders, which means supplanter.