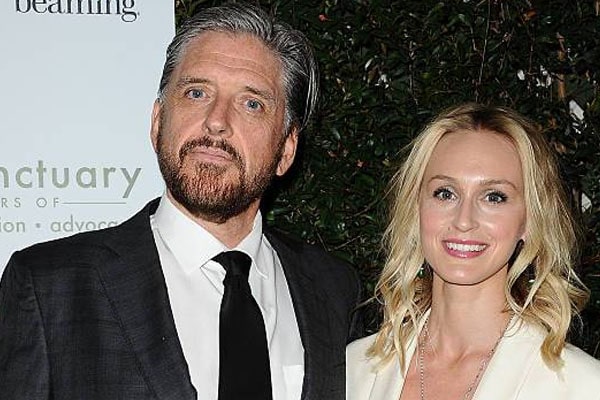 When the world of two different visual pleasures, television and art collided, a beautiful love was formed. The famous TV host and author Craig Ferguson got married to Megan Wallace Cunningham in 2008 and got blessed with a child, a son Liam James Ferguson on January 31st, 2011. The couple has been going strong since their early days of marriage and the spark does not seem to have waned away. Finally, after marrying three times (Megan is Craig’s third wife), Craig Ferguson has found his muse and bundle of happiness.

Liam James Ferguson has inherited his Papa Craig’s commentary skills as he landed a role in a well-loved animation movie ‘How to Train Your Dragon.’ According to the how to train your dragon fandom, he was the voice actor for the character ‘Nuffink Haddock’ in the short film ‘How To Train Your Dragon: Homecoming’ produced by DreamWorks Animation. And father Craig couldn’t be more proud that he had to post a funny tweet.

Do you have to give your kids any money they may earn? Asking for a friend. pic.twitter.com/3awByVeMKT

Even after having such a famous father and being a cast of the film himself, Liam has not been photographed or seen in public frequently. We can assume that dad Craig wants his son Liam not to be rushed with cameras as he does not post anything about baby Liam at all. And for his mama Megan, she is not active on social media platforms at all, so probably they are maintaining life away from the spotlight.

Not only has Liam inherited his father’s acting skill but he has even picked up the same interests. Both the father and son duo are huge car enthusiasts and probably they are always talking about their favorite cars together. Well well, Aren’t the father-son duo so adorable?

Even at such a young age, Liam seems to be confident in his dialogue delivery. As the movie touched everyone’s heart and made awe with Nuffink’s cuteness, we hope to keep on seeing little Liam in further days.

Liam James Ferguson’s parents, father Craig Ferguson, the famous TV host, and mother Megan Wallace Cunningham, an art dealer, got married back in 2008. They have already spent a decade of marriage together and still going strong. And the couple can’t be happier after being blessed by such a cute and talented child Liam.

We hope Craig Ferguson’s son Liam is living a very comfortable life and enjoying moments together with his parents. Since they are maintaining such a low profile, we guess they are protecting Liam to the fullest before letting him go into the world of struggles and hard work. As for cutie Liam, we wish him to grow happy, healthy, and prosperous. Maybe, we will get to see him on the silver screen in days to come. Who Knows?

The name Liam is of Irish origin, meaning strong-willed warrior and protector. As for his middle name James, it is of Hebrew origin, which means “supplanter,” one who follows.