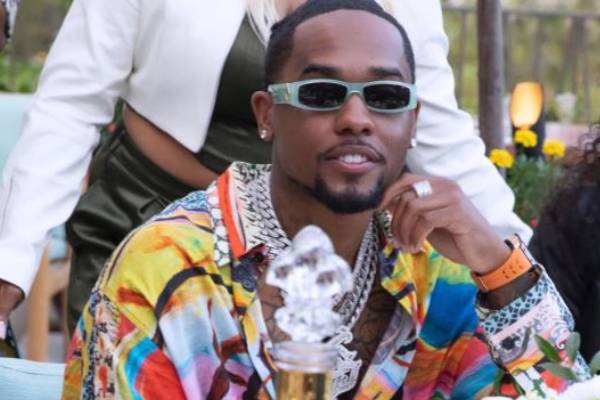 London Tyler Holmes, renowned by his stage name London on da Track, is a famous rapper, record producer, and songwriter. He has gained significant fame in the music world and has also amassed generously. The singer has collaborated with several other musicians, including Ariana Grande, Drake, Lil Wayne, and others.

With that being said about his professional life, the rapper is a proud father of four babies, whom he shares with different baby mamas. Fans want to know about his kids. So, in this article, let’s learn in detail about London on da Track’s children.

As mentioned earlier, the rapper has welcomed four children with different baby mamas. Erica Racine is one of the mothers of his kids with whom he shares a son London Nathan Holmes, also known as London on da Track Jr. The little guy was born in October 2016 and is the eldest child of his dad.

London on da Track’s son has Spastic Diplegia (a form of cerebral palsy), which affects his central motor skills and physical mobility. He cannot walk independently and relies on his stroller and walker. While London Nathan’s mom was pregnant with him, the doctors had revealed to her that he was too early to survive in the world.

When London turned five, a surgery was suitable for his condition, and he went through the operation in December 2021. Hopefully, his condition will improve in the coming days.

Moreover, London Nathan’s dad sued his mom for full custody of him in April 2020. He claimed Erica was possibly abusing drugs and had made worrying posts online. The singer stated that he does not believe his baby mama is physically, financially, and psychologically capable of being a primary caregiver. Furthermore, London even asked for a psych evaluation for her and a special guardian in order to advocate for the boy in the court.

London on da Track’s baby mama fired back in a countersuit against him, claiming when she wanted to stay with her mom for two months in Arizona, the rapper threatened to cut off medical care for their child unless she left him with his paternal grandmother. But after doing so, she shared she was blocked from getting their son back. She also accused him of being way behind on the $1,100 monthly child support.

The songwriter was awarded custody temporarily. However, it is not known what decision came later.

A Son And A Daughter With Two Other Babymamas

London welcomed a daughter, Paris Holmes, with Eboni Ivorii. She is his eldest baby girl, but he has not revealed much about her. Furthermore, Paris’ parents had an ugly dispute. Her mom called out London and his ex-girlfriend, Summer Walker, and slammed the latter for getting pregnant when the rapper already had issues with his other baby mamas.

Moreover, Paris Holmes’ mother claimed Holmes didn’t bother to contact her for Christmas and did not send any gifts. Eboni has bashed London from time to time, calling him an absent father.

The well-known rapper welcomed a son Cairo Saint-Legend Holmes on April 25, 2019, with Dayira Jones. He has an Instagram account run by his mom and seems to be living a wonderful life. Despite the wreck in his relationship with Dayira, London must be co-parenting with her to raise their child.

Shares A Daughter With A Singer

London on da Track’s daughter, Bubbles Holmes, is his youngest child, whom he welcomed on March 22, 2021, with the singer Summer Walker. The musician duo was in an on-and-off relationship for a long time before ending it permanently. London’s ex-girlfriend revealed her pregnancy in November 2020. Likewise, he also tweeted pictures of him and pregnant Walker.

The rapper’s baby mama, Eboni, revealed the pregnancy news before Summer had the chance to. Afterward, the latter shared a few of the pictures with her baby bump.

Nevertheless, London on da Track’s children must be living a wonderful life. They all might have a good relationship with each other. As the kids of a singer, who knows, they might follow in their dad’s footsteps. Well, the time will only tell!

The name London has an English origin, and it means From The Great River. Likewise, Nathan’s name has a Hebrew origin, which means He Gave.

London on da Track’s son, Cairo’s name has an Arabic origin, which means Victorious One. Furthermore, his middle name Saint means Holy Person and has an American origin. Legend is also an English word, meaning History, Story, and Myth.