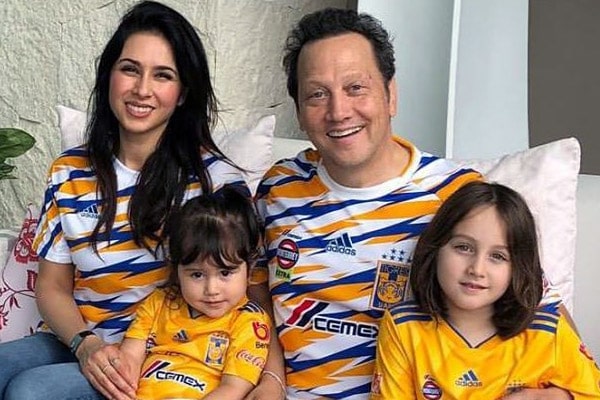 Robert Michael Schneider, best known as Rob Schneider, is an actor, director, and comedian. He stars in the Grown-Ups comedies and shares laugh in various Adam Sandler films. Moreover, he is the cast member of Saturday Night Live since 1988, where he performed multiple roles such as ‘Tiny Elvis,’ ‘Richard Laymer,’ and so on.

In the personal life of Rob, he married thrice and divorced twice and has three gorgeous daughters. His first wife is London King. The second is Helena Schneider. And finally, he is living a happy marital life with his third wife, Patricia Maya Schneider. The couple shares two children. One of them is Madeline Robbie Schneider.

Born As Second Daughter of Rob With Wife Patricia

The couple, Rob and Patricia gave birth to Madeline Robbie Schneider on 4 September 2016 as their second child together. The little princess of Rob weighed 7 lbs. 13 oz at the time of her delivery at 5:56 am. The proud papa, Rob announced the arrival of his little princess, Madeline, via his official twitter page just some hours after her birth. Unfortunately, the post is no more available.

The blessed parents of Madeline often share pictures of her on their social media pages.

Her Half-Sister Is A Superstar

As mentioned before, Madeline’s father married thrice in his lifetime. His first marriage was with a former model London King. Rob was in a marital relationship with King from 1988 to 1990. While the estranged couple was together, they welcomed their first child, a daughter, Tanner Elle Schneider, on 3 July 1989.

Feliz dia de la Familia! From my family to yours! pic.twitter.com/R9K13tn6s5

Usually, when one has a celebrity parent, it’s easy to gain popularity instead of beginning from scratch. However, it’s not in the case of Tanner. Rob Schneider’s first child, Tanner, dropped her dad’s name. Instead, she went with the name Elle and took her mother’s surname King since her teenage years. And, in present, she goes by the name Elle King.

Madeline’s half-sister, Elle is an actress too. Moreover, she is famous as the singer of ‘Ex’s & Oh’s.’ She has a sultry and sexy voice along with interest in country music, blues, and rock. Also, Elle, aka Tanner, is good with instruments like guitar and banjo.

Furthermore, Elle King gives credit to her career as a musician to her step-dad Justin Tesa. He gave her a record at the young age of nine years.

Elle King is not the only talented child in Rob Schneider’s family. Madeline’s sister, Miranda Scarlett Schneider, also inherits the acting skill of their dad. The skilled girl of Rob, Miranda, is a regular on her dad’s reality TV show Real Bob.

Madeline’s older sibling, Miranda, is the first child of the celebrity couple, Rob and Patricia, born on 16 November 2012 at 8:59 pm. The reality TV actress, Miranda, weighed in at 5.13 lbs and measured 18 inches at the time of her birth.

The girl name Madeline is of English origin. Madeline’s meaning is high tower or woman from Magdala.