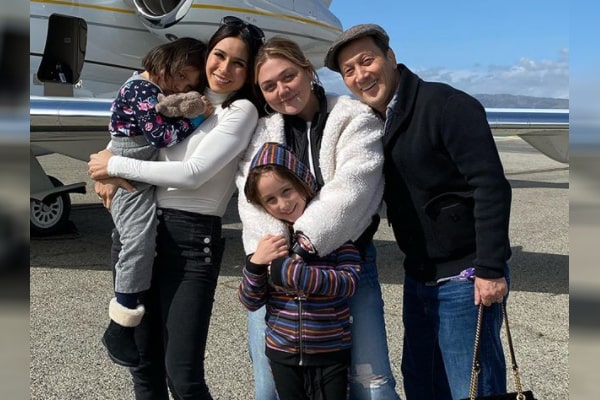 Besides being a successful actor and director, Rob is also a doting father of three children from his two different relationships. Here, we shall be talking about Rob Schneider’s daughter, Miranda Scarlett Schneider with wife, Patricia Azarcoya Schneider.

Aforementioned, Rob is a father of three kids of whom he shares two with his current wife, Patricia. The pair welcomed their eldest daughter, Miranda Scarlett Schneider on Nov 16, 2012, in Los Angeles.

Rob Schneider’s daughter, Miranda, was born following 19 hours of labor of the couple who shared their vows in April 2011. The little Miranda Scarlett weighed in at 5lbs., 3oz, and was 18 inches long at the time of birth.

The Wings actor Rob announced Miranda’s birth via Twitter, which seems to have vanished today. But the couple was overwhelmed with ecstasy to have welcomed their first child together whatsoever.

Her Half-Sibling Is A Singer

Although giving birth to Miranda was the experience of Rob Schneider’s wife, Patricia, welcoming a baby was not the first for the comedian himself. He had welcomed a daughter, Elle King, from his romantic relationship with a former model London King.

Miranda Schneider’s half-sibling is making a name for herself via her musical journey. The 31-year-old singer-songwriter Tanner Elle Schneider better known as Elle started her singing career in 1998 and has been creating wonders with her artistic skills.

Besides having an older and famous half-sibling, she also has a younger sibling named Madeline Robbie Schneider. The Schneiders welcomed their second child and Miranda’s baby sister in September 2016.

Although Rob Schneider’s daughter, Miranda, is only seven years old, she adapted to her father’s glam world quite well. She appeared on the show, ‘Real Rob,’ a web television sitcom.

The show followed the everyday life of Schneider, including Miranda and her mother. The show premiered in December 2015 on Netflix and renewed for a second season in September 2017.

Hence, Rob’s daughter, Miranda, will be witnessing the flashy world first hand and possibly grow on her father’s name. But will she choose the glam world or stay grounded and choose a different path from her parents? What do you think?

Good food and a funny man is the key to a woman’s heart, or so it seems to be the taste of Miranda Schneider’s mother, Patricia’s choice. Her parents, Rob, a comedian, and Patricia, a Mexican television producer, tied knots in April 2011 amidst friends and families.

According to People, the pair shared their vows in a private ceremony in Beverly Hills, surrounded by their closest friends and families. Furthermore, Mr. Schneider revealed about having a great time during the marriage ceremony and was excited about the honeymoon.

Well, the honeymoon must have been a blast as they welcomed their first kid the following year. Mrs. Schneider became a stay-at-home mother to look after her infant daughter. As their children grew, Patricia found a way to continue her love of producing and started her YouTube channel.

Rob’s baby mama, Patricia, runs a cooking channel with 2.19K subscribers and has uploaded 31 videos since June 2019. Well, Miranda’s mother is finding a way to use her time and feed her children well.

Let’s hope Mrs. Schneider’s channel rises while Miranda blossoms to be a beautiful and empowering woman.

The name Miranda originated from Latin, which means worthy of admiration. Similarly, Scarlett means red and has English origin.