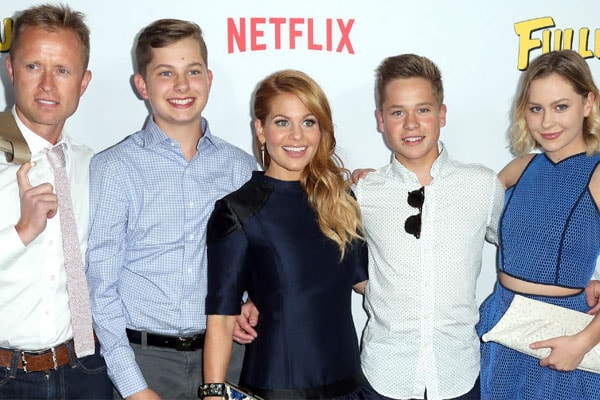 Candace Bure Is A Proud Mother

The American actress Candace Cameron Bure is a proud mother of three children. Her daughter, Natasha, is following her mom’s footsteps and has starred in commercials and modeling. Now, all we need to know about is Candace Cameron Bure’s two sons. So, without any further ado, let’s get right into it.

Candace and Valeri’s eldest son, Lev Bure, grew up in the spotlight. He became a preacher at Shephard Church in LA in May 2018 as he was passionate about preaching. Plus, Candace Cameron Bure’s son, Lev Bure, completed his high school in 2018.

And with that feat, Candace’s happiness contained no boundaries. The whole family was there to celebrate Candace Bure’s son’s graduation.

Like his elder sister Natasha Bure, Lev Bure also runs a YouTube channel. Lev’s YouTube videos are mainly about his travels. At times he doesn’t mind featuring his younger brother Maksim too. As of May 2020, Lev has got over 1.3K subscribers.

Candace Cameron Bure’s son, Lev Valerievich Bure, was in a relationship with Bella Robertson, Korie, and Willie Robertson’s daughter. But their relationship did not last long.

Going through Lev Bure’s Instagram, he is in a loving relationship with beautiful Taylor Hutchison at the moment. He frequently posts lovely photos of him with her. Lev’s face has a glow when he’s with her. The love birds love spending time with each other.

The love birds recently got engaged. Lev updated his Instagram followers with a beautiful picture of him proposing his fiancee, captioning, ‘cannot wait to be your husband.’ Congratulations to the newly engaged couple. Let’s hope to see more of their journey together.

As for another of Candace Cameron Bure’s sons, Maksim Bure is very passionate about hockey. He is an Ice Hockey player and plays for the Northstar Knights. He seems to be earning fulfilling money as a team player. Maksim dreams of being an NHL player in the upcoming years, so he is thriving day by day to improve his game.

Besides ice hockey, Candace Cameron Bure’s sons also love shooting. They visit shooting ranges and showcase their shooting skills there. The two brothers have a great bond and are always there for each other.

There are no details about whether Maksim Bure is dating someone or not. Perhaps it looks as though he is single and is happy with his life. Or it could even be that he is very private when it comes to his personal life. Nevertheless, Maksim is making his family proud as an ice hockey player.

Maksim Valerievich Bure – Maksim is a Russian word derived from the Latin word ‘Maximus.’ The name Maximus in Latin  means “the greatest.”

Lev Valerievich Bure – Lev has got different origins. In Slavic origin, it means “Lion”, and if it’s used for a female, then in Hebrew, it translates to “heart.”