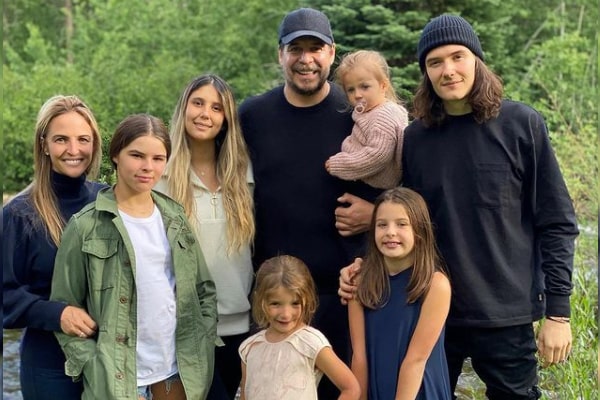 Raul Marcelo Claure or Marcelo Claure is the CEO and COO of SoftBank Group Corporation. The triumphant tech entrepreneur and businessman, Claure grew up in Bolivia and received an Honorary Doctorate of Commercial Sciences from Bentley University.

With a whopping net worth of $900 million, Marcelo Claure provides a very comfortable life for his six children. Yes, Marcelo fathers six kids; four with his wife, Jordan Engard, and two from his previous marriage. Therefore, here, we shall talk about Marcelo Claure’s children and their whereabouts.

Aforementioned, business tycoon Marcelo Claure rose to fame through his venture and lives a hundred percent of his life every day. Unfortunately, he is sort of secretive about his previous relationship. However, Claure embraced fatherhood from his first marriage and welcomed two children, a son, Nico Claure, and a daughter, Paulina Claure.

Therefore, here is our attempt to break down the whereabouts of Marcelo Claure’s children.

As mentioned earlier, tech entrepreneur Marcelo is a doting father of six, two with Patricia and four with his current partner Jordan.

Moreover, Marcelo became a father for the first time to his son, Nico Claure, in 1995. He is the oldest amongst Claure’s six children. Furthermore, he keeps a real close bond with his father and is a constant face on his Instagram.

Also, Nico became a brother when his parents gifted him a baby sister in 1997, Paulina Claure. The Claure siblings are incredibly close, compassionate, and spend much time with their father and step-family.

Additionally, Marcelo Claure’s son, Nico Claure, seems to have found his passion in music. He garners 6K+ followers on Instagram but only has nine posts, all music-related. Besides music, he is a massive soccer & bike fan like his father and enjoys quality time with him.

Likewise, the 26-year-old Nico Claure is in a relationship with a gorgeous lady named Simona. The pair seems to be committed to one another as they accompanied Marcelo during a vacation. Also, Nico’s girlfriend posted a video of them together where he commented, “I love you.”

Despite leaving his followers to guess about his whereabouts, Marcelo, gives insight into his life every once in a while. Hence, he is having the best time surrounded by his loved ones, including his sister, Paulina.

Marcelo Claure welcomed his daughter, Paulina Claure, in 1997 with his former partner, Patricia Lara Claure. Sadly, her mother is lowkey about her whereabouts, and Paulina is very private about her life.

However, Marcelo revealed that his daughter, Paulina is an intelligent woman who graduated from the University of Miami in 2019. Unfortunately, she is yet to disclose her degree but is as innovative as her father. She further grew up into a compassionate lady and an avid animal lover. Hence, Marcelo Claure is a proud father of a co-founder-cum-owner of Wonder Paws Rescue, Paulina.

The main objective of Claure’s organization is to help families with animals in crisis and animals in need of rescue. Furthermore, along with her team, Paulina helps provide food, shelter, medical attention and hopes to find a permanent home for the homeless animals.

Please help us give Theodore the best chance at a normal life. No amount is too small!

Moreover, Marcelo Claure’s daughter, Paulina’s venture, further boasts to have rescued, saved, and found families for over 650 abandoned dogs and cats. As of now, the 24-year-old daughter of a multimillionaire, Paulina, is a happy and gorgeous woman with two adorable dimples and flaunts her long blonde hair.

Besides, Marcelo and Paulina maintain a very close relationship, and she seems to have a great bonding with her half-sisters and step-mother, Jordan. Unlike her brother Nico, her relationship status is still a mystery, but she is a beautiful girl focused on animals. But, let’s hope to hear more of her in the coming days.

And now, let’s move on to Marcelo Claure’s children with his wife, Jordan Engard.

As of now, Marcelo is a proud father of five daughters and a son. He is currently a happily married man to his wife, Jordan Engard. The pair exchanged vows on December 10, 2005, a year after his divorce from his’s former spouse, Patricia.

The Claure couple’s wedding was grand, and both looked spectacular on their important day. Moreover, Jordan accompanies her husband on events but shies away from social media. Furthermore, Marcelo still showers his partner with love and affection via his Instagram account. But that’s the story for the next time. Here, let’s focus on his daughters, Siena, Bela, Savannah, and Mia.

The first bundle of joy Marcelo and Jordan welcomed together was Siena Claure in 2008. The oldest child of the pair is one of the funkiest and outgoing kids. Although she just turned 13 in April and is yet to start her own social media, Siena has become pretty popular via her father’s Instagram.

Moreover, Marcelo refers to her as his ride or die and accompanies him in whatever activities. She is also a massive soccer fan like her dad and enjoys watching the game together. Likewise, riding a bike seems to be a family activity in the Claure household, and Marcelo’s daughter, Siena, turned out to be an excellent rider.

Similarly, Marcelo’s daughter also follows her father for fishing and other outdoor sports. Hence, it wouldn’t be a mistake to say she is a daddy’s girl. Besides sports and outdoor activities, Siena also accompanies her father at work and learns from her father’s venture.

Likewise, she is also the oldest of four and has definitely developed a motherly instinct for her younger sisters. Similarly, she also has a strong bond with her half-brother, Nico, and half-sister, Paulina.

Additionally, it is no secret that Siena’s father is quite philanthropic. Hence, she must have inherited one or two traits from him naturally. The middle school girl also helped her father teach an English class to kids via Sumba Foundation in 2019. Hence, she must have become a more caring girl.

The Claure couple were more than excited to welcomed their second daughter, Bela Marta Claure, on September 15, 2010. Furthermore, Bela’s father still shares pictures of the day she was born with heartwarming posts.

Moreover, Bela is a sweet kid and loves sweets. Hence, she celebrated ten years of her life with an aisle of cakes at the Museum of Ice cream in September 2020. She further loves to ride horses and bikes like her sisters.

Marcelo Claure’s daughter, Bela Marta Claure, has a healthy relationship with her siblings, including Nico and Paulina. Hence, she will grow up into a confident girl inspired by her older siblings.

Marcelo and Jordan did not stop with baby number two and were already set to welcome the beautiful Savannah Celeste Claure. Hence, her arrival was grandly celebrated on April 10, 2015, in Kansas City.

The excited dad, Marcelo, announced the arrival of his baby girl via Twitter, captioning, “she was made in Rio and born in Kansas City in the morning.” He further ended the tweet with “Dad again.”

Welcome to the world. Savannah Celeste Claure. She was Made in Rio and born in Kansas City this morning. Dad again. pic.twitter.com/QizUhVq2gi

Interestingly, Bela was born the same year her parents tied the knot. The 10-year-old is growing into a soft lady with a gentle smile and a sharp brain. She loves horses like her older siblings and accompanies them in every event. She also loves to dance and made her paa proud singing and dancing at her Christmas school performance in 2019.

In fact, Bela is one of the stars of her father, Marcelo’s Instagram. She enjoys being an older sister after the arrival of the youngest in the family, Mia Claure.

The littlest one in the family is the MOST pampered one, and it is no different in the case of Marcelo Claure’s daughter, Mia Claure. She was born on August 8, 2018, and her father posted a picture of them claiming she was the best thing to happen in his life.

The youngest in the family, Mia, is growing up with all the love and care from the Claure family. Moreover, her father even claimed her to be his doppelganger. There are several adorable pictures of her on his Instagram, including her first food and bicycle ride.

We will surely see all of Marcelo Claure’s children in the future who might pave their own paths or follow in their father’s footsteps. Until then, let’s hope they grow up quickly and start their own social media for us to witness their growth from their point of view.

The name Nico is of Greek origin, which means people’s victory. Likewise, Paulina means small and hails from Greece.

Siena means orange-red and is also the name of a city in Italy. Similarly, Bela means beautiful in Italian, while Marta is derived from Aramaic that translated to ‘the lady.’