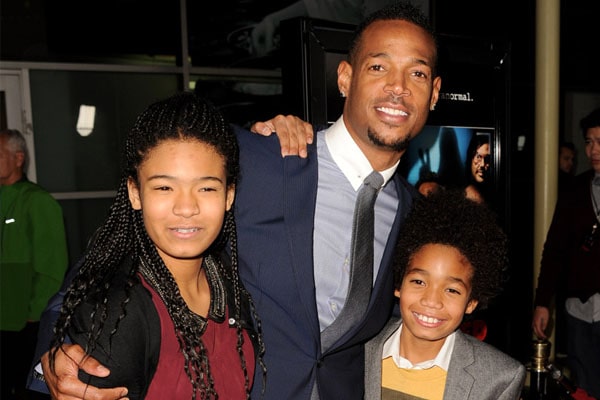 The American comedian Marlon Wayans has two lovely kids with ex-wife Angelica Zachary. He has got a son named Shawn Howell Wayans and a daughter named Amai Zackary Wayans. Marlon and Angelica were in a long-term relationship before marrying one another in 2005. However, the tow divorced each other in 2013.

The “White Chicks” actor, Marlon is happy and considers himself fortunate to be blessed with two lovely children. Going through Marlon Wayans’ Instragam profile, we can get a clear scenario of what his children mean to him and how precious he thinks of them. So, let’s get straight down to know more about Marlon Wayans’ kids with his ex-wife, Angelica.

Marlon Wayans’ daughter Amai Zackary Wayans was born on the 24th of May,2000. She is Marlon’s firstborn child and has a younger brother named Shawn Howell Wayans. He adores his daughter Amai a lot. Well, Amai came out to her comfort zone and said the truth about her sexuality to him. She came out when she was only 14 years old.

Marlon Wayans’ daughter did it using one of the lines of a Katy Perry song, “I kissed a girl and I liked it.” The actor said to the hosts of the show that he had asked her why she chose Katy Perry’s song instead of an Aretha Franklin‘s one to come out.

Marlon is not afraid of publicly supporting her sexual preferences whenever it’s required. He is very possessive about disrespectful remarks on Amai. After Marlon took it to Instagram to show his unconditional love to Amai Zackery in a Pride post, the hate comments rained on the post.

But Marlon defended Amai and pointed out that the world needed to see that ignorance never stopped being a problem in today’s society.

Nevertheless, Marlon Wayans loves his daughter so much with ‘Pride.’ She is very fortunate to have such loving and caring parents indeed. And Marlon thanks his children for giving him a life purpose beyond his purpose.

As for Marlon’s second child, Shawn Howell Wayans, he was born on the 3rd of February, 2002. Marlon Wayans’ look-alike son, Shawn is a talented basketball player. Marlon described him as a “young Steph Curry.” His dad also congratulated him on the school basketball league win.

He was so much proud of his son and shared a rare photo of his teenage son. He has over 26k followers on his Instagram account. If everything goes well, Shawn Howell could become one of the greatest ballers in basketball in the future.

In an interview, Marlon stated that he always encourages his kids to stay on the path which leads to success. He further added that he tells his kids to focus their energy on something useful.

We can spot the trio in different locations. Marlon Wayans takes his kids with himself at movie premiers, interviews, and many other places. They tend to spend quality family time together as much as they can. Like Marlon, Thalia and Tommy Mottola also have a daughter and a son.

Marlon has got an equal amount of love for both of his children. He also loves uploading his children’s childhood photos too. Marlon Wayans’ two children Amai Zackary Wayans and Shawn Howell Wayans will have to do a lot to fill the shoes of their superstar father.

Amai Zackary Wayans – The name Amai is of Japanese origin, meaning ‘sweet.’ Similarly, Zachary derived from the Hebrew ‘Zekharyah’ and it refers to ‘God has remembered.’