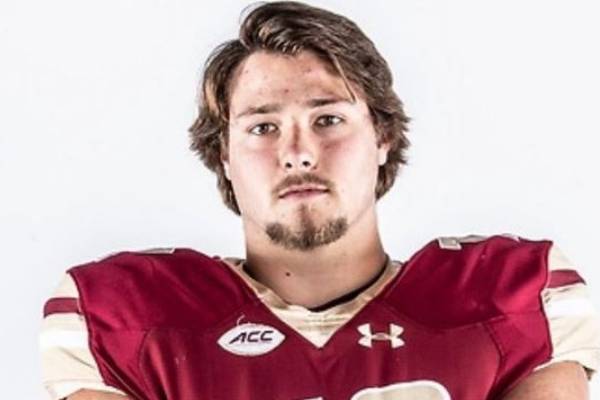 In January 2018, Tennessee Titans hired a new face as their head coach. He is Michael George Vrabel, also known as Mike Vrabel. Before that, he used to work for the Houston Texans from 2014 to 2017 as their linebackers coach and defensive coordinator. He is known for the exemplary playing skills that he showed as an NFL player for 13 years with different teams.

Like his professional career, Mike’s personal life is always going great. He has been married for a long time to Jennifer Vrabel aka Jen Vrabel. The couple together welcomed two kids and among them, Tyler Vrabel is the eldest. In this article, let’s learn more about Mike Vrabel’s son and his career.

Eldest Of The Vrabel’s Family

As mentioned earlier, Mike Vrabel’s child, Tyler Vrabel, is his eldest son with Jen Vrabel, whom they welcomed in 2000. Tyler’s parents wedded in 1998 after meeting in a class at Ohio State University. He also has a younger brother named Carter Vrabel, who was born in 2002.

Tyler and Carter grew up together, having a wonderful time. Tyler’s mom and dad are die-hard sports fans and, he and his brother too are sports fans. The Vrabel family has been living a great life together.

Growing up in a family where his dad is involved in football sports, Tyler also developed some interest in the game. Mike Vrabel’s son, Tyler, attended Saint Pius X High School. That was where his football journey began. During his high school football career, Tyler was rated as the No. 237 player in Texas.

Moreover, 247Sports also named Mike’s son as the country’s No. 152 offensive tackle. According to ESPN Recruiting, he was the No. 171 player in Texas and the nation’s No. 103 offensive tackle. Tyler also became an all-state first-team selection and first-team all-district. He played as the team captain for head coach Stephen Hill and even became the offensive lineman of the year finalist in Texas.

Mike Vrabel’s Son Is A Star At College

After a successful high school career, Tyler enrolled in Boston College Morrissey College of Arts and Sciences with a communication major. He not only continued his academic career there but also his athletic career. In January 2017, Tyler announced his commitment to the college’s football team, Boston College Eagles, via Twitter.

While announcing the news, Mike’s eldest son thanked his coaches, parents, and the programs he played for. He is an offensive lineman at the college. In 2018, during his freshman year, he redshirted after playing two games.

In the 2019 season, he got his first real taste of action as a redshirt freshman. He had a strong season in 2019. Moreover, he was also named to the Freshman All-American teams by The Athletic.

Tyler had pretty successful seasons and played very well. Like his father, Tyler Vrabel might also get into NFL someday and become even more successful than him.

Is Tyler Vrable In A Relationship?

Mike Vrabel’s son Tyler Vrabel seems to be doing great professionally. And now the people want to know if the handsome son of the NFL coach has got any girlfriend. Going through his Instagram, we can see him posing with a girl named Sidney Cabaud.

Tyler even went to homecoming and prom with Sidney in 2017. However, whether she is truly Tyler Vrabel’s girlfriend is unclear. Nevertheless, let’s hope to know more about his love life in the coming days.

Tyler must be doing great for himself and is in sound health. Nevertheless, let’s hope we get to see him get successful in the future.