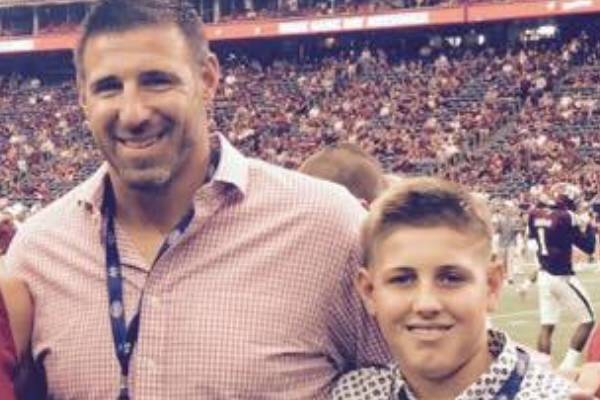 Mike Vrabel is one of the famous names in the NFL world. Born Michael George Vrabel, Mike is the head coach of the National Football League team Tennessee Titans. Vrabel is also a former NFL player who has played for many teams, including the New England Patriots, Kansas City Chiefs, and Pittsburgh Steelers. He had a successful playing career, and his coaching career is also going great.

Because of the growing fame of Mike, his personal life has also been the topic of interest for many NFL fans. He has been married to Jen Vrabel for many years now, and they together welcomed two children. Tyler Vrabel is the eldest, and Carter Vrabel is the youngest child of the family.

In this article, let’s know in detail about Mike Vrabel’s son, Carter, and his career.

Youngest Of The Vrabel Boys

As mentioned earlier, Mike Vrabel’s son Carter Vrabel is his youngest child, whom he welcomed on November 20, 2002. Carter’s parents have been married since 1998, having first met in a class at Ohio State University. It already has been more than twenty years since his dad and mom tied the knot, and in all these years of being married, they welcomed him and his elder brother.

Carter Vrabel’s brother, Tyler Vrabel, was born in 2000. As the youngest of the Vrabel boys, Carter was undoubtedly pampered really well by his parents and elder sibling. The boys must have had a great time growing up together.

Carter and his brother, Tyler, grew up in a sports-influenced family. Their father has been in NFL for several years. Carter’s brother has followed in his dad’s footsteps and plays football for Boston Eagles at Boston College. However, Mike Vrabel’s youngest kid, Carter Vrabel, seems to have a different type of sports interest.

While his dad and brother are football players, the youngest Vrabel’s choice of sport is baseball. Carter began his playing career at high school. He attended Father Ryan High School and played as a pitcher for the team’s baseball team.

Then, according to the Volunteer State Pioneers baseball roster, he played as infield and pitcher for Volunteer State Community College. In September 2019, Mike’s baby boy committed to Wabash Valley College to continue his academic and athletic career.

Carter shared the great news via Twitter and also thanked his parents, travel ball coaches, and high school coaches. His parents and brother must be extremely proud of his achievement.

Mike Vrabel and his wife, Jen Vrabel, revealed that Carter Vrabel has learning differences. While Carter’s brother loved to read books as a child, he struggled with the task and could never sit still. Even doing basic homework would take him 30 or 45 minutes, and Mike’s son also had meltdowns after returning from school.

Carter Vrabel’s mom also stated that the schools he went to did not take proper care of his problem and dodged off without even trying to help him. During one summer, one of the teachers revealed that he did not know his sounds. As a result, his parents kept him in a phonics program four days a week for twelve weeks.

During his sixth grade, Carter’s school accommodated him in such a way that was conducive to reading. He moved to different schools because of his dad’s job. In the article, his mom revealed that she was nervous about college for him as standardized testing is a huge part of getting into university.

Carter seemed to have understood his problem and has evolved with it. As Mike Vrabel’s son has already got into college, he must have done well in standardized testing. Today he might be doing great at college, both in academics and baseball.

Furthermore, talking about his relationship, Carter has not revealed anything about his love life. It is not known if he is dating anyone. But any girl dating a handsome guy like him must be fortunate and we hope to be acquainted with Carter Vrabel’s girlfriend in the future.

Unlike his brother, he seems to be a private person as he has kept his social media private and hasn’t disclosed anything about his personal life.

Nevertheless, Carter must be doing great in his life. Let’s hope we get to see Mike Vrabel’s son has a successful career.

The name Carter has an English origin and it means Driver Of A Cart.