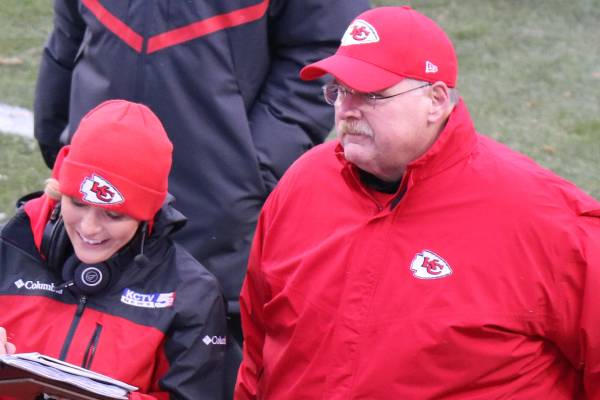 Andy Reid's son Spencer Reid worked for a year under him at the Kansas City Chiefs. Image Source: Wikimedia Commons.

Andy Reid a well-known name in the NFL world thanks to his decades-long coaching career. The experienced 63-year-old is the head coach of the Kansas City Chiefs in the National Football League (NFL). He led the Chiefs to a Super Bowl victory over the San Francisco 49ers in 2019. Andy is considered as an offensive mastermind within the NFL.

Besides coaching, Andy is a family man. He is married to Tammy Reid. The couple has welcomed five children (three sons and two daughters) in their marital life. Unfortunately, his eldest son Garrett Reid died of a heroin overdose at the age of 29 in 2012. Andy’s other sons, Britt Reid and Spencer Reid, have gone on to pursue their careers in the footballing world like him. However, Andy’s daughters, Crosby Reid and Drew Ann Reid, relatively live away from the spotlight.

In today’s article, we will look into Andy Reid’s son, Spencer Reid who is also into football. Furthermore, we will talk about Spencer’s profession and what he does.

Grew Up Surrounded By Football

Spencer Reid is the youngest son of Kansas City Chiefs head coach Andy Reid and his wife, Tammy Reid. He has grown up around the footballing world. He was just 12 years old when he went to his first Super Bowl with his father as the coach of the Philadelphia Eagles.

The 30-year-old played football at Temple University in Philadelphia as a running back during his college days. After completing college, Spencer joined the Mormon Church in Fresno, California, to complete a two-year mission.

After coming back from completing the mission, Spencer decided to get involved in the game just like his father and older brother Britt. To pursue his career in the football world, he went to the University of Utah to get his college degree in kinesiology.

Andy Reid’s Son Is Following In His Footsteps

Following his college graduation from Utah University in kinesiology, Spencer worked as an intern under his father at the Kansas City Chiefs in 2018. After working for a year, Spencer joined Boston College in 2019 to work as an assistant to head strength and conditioning coach Scott McLafferty. Steve Addazio was the head coach of the team. Spencer still works with Steve and Scott in his new job.

Spencer Reid currently works as an assistant strength and conditioning coach for Colorado State University. He was offered the job by Steve Addazio, with whom he worked within Boston.

Spencer didn’t hesitate a second when Steve and Scott came calling for him. He described them as great family guys who reminded him of his father. Their values are similar to his dad’s, and he wanted to follow that. Andy Reid’s son hopes to establish a family-oriented foundation and grow as a group to become successful.

Comes From A Religious Family With Troubled Past

As mentioned above, Spencer’s eldest brother Garrett Reid died of a heroin overdose on August 5, 2012. He was found dead in one of the training facility dorm rooms while he was unofficially working with the Eagles during his rehabilitation period.

Similarly, Spencer Reid’s other brother Britt Reid has also been involved in a drink and drive incident. Britt crashed his car into two parked vehicles on a ramp in April 2021, injuring a 5-year-old passenger in one of the cars. Due to this accident, the child ended up suffering a traumatic brain injury. His trial is scheduled to begin on April 18, 2022. He could end up serving up to seven years in prison if convicted.

Spencer and his whole family are members of The Church of Jesus Christ of Latter-day Saints. His father, Andy even converted himself into a Mormon for his wife, Tammy Reid. Spencer also completed his church mission before getting his college degree. He mentioned this experience as one of the best experiences of his life and changed his way of thinking.

Information about the professional achievements of Spencer is public knowledge. But Andy’s youngest kid, who is in his late 20s, is very private about his romantic life. Therefore, who Spencer Reid’s girlfriend is is a mystery.

It seems the Reid family has been through a lot. However, we wish Andy Reid’s son all the best in the future with his new job. We hope to see much more of them in the future.

The name, Spencer is of British origin and means administrator or steward.