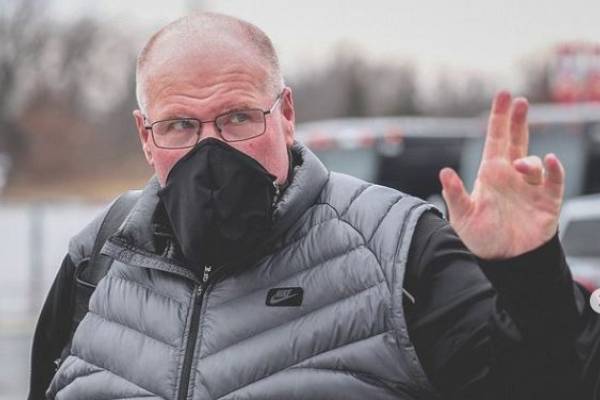 Andy Reid is one of the most admired and respected coaches in the National Football League (NFL). The 63-year-old veteran is the present head coach of the Kansas City Chiefs. Andy has been to the Super Bowl final four times in his coaching career winning it twice, first with the Green Bay Packers as an assistant coach and then as a head coach with the Chiefs.

Apart from being a coach, Andy is a very religious family man and has been married to his lovely spouse, Tammy Reid, since 1981. Their marriage is truly an inspiration and motivation to all the young lovers out there.

Hence, in this article, we will take a closer look into Andy Reid’s wife, Tammy Reid. We will discuss the struggles and joys during the love bird’s marital life. Furthermore, we will try to know what exactly kept the couple together for so long, making their marriage successful.

Tammy Reid was born on 6th November 1959 in the United States to a devout Mormon family. She attended Brigham Young University in Provo, Utah, and completed her studies from there. Similarly, Andy was also enrolled in the same university. The love birds met during their college days while attending a physical education class together.

The college sweethearts then dated for a brief period and are now happily married. The pair tied the knot on 8th August 1981. Andy and Tammy have been through a lot during their marriage but have successfully stayed by each other’s side during difficult periods.

In the initial days when Andy was umpiring baseball games, it was difficult for the duo to meet ends. The pair didn’t have enough money and were financially poor. However, their bond has been unbreakable due to their mutual respect and love for each other.

Tammy is the only person who calls Andy “Andrew” while the NFL coach refers to his wife as his girlfriend to this date.

Also Read: Know About Jean Yoon Life As A Mother

Lost Her Eldest Son Due To Drug Addiction

During their marriage of over four decades, Andy Reid’s wife Tammy Reid has welcomed five wonderful kids into this world. She raised three sons, Garrett Reid, Britt Reid, and Spencer Reid, alongside two daughters, Crosby Reid and Drew Ann Reid. Britt and Spencer both have gone on to have successful careers in the footballing world. Her daughters were also school athletes but never played any sports professionally.

Unfortunately, the couple’s eldest son Garrett passed away on 5th August 2012 from a heroin overdose. Garrett was living a troubled life, addicted to drugs and alcohol. He was once sentenced to up to 23 months in prison while he smashed his vehicle into another person’s car high on heroin. Garrett mentioned that he enjoyed the thrill of living as a drug dealer.

However, Tammy and her husband Andy tried their best to help their son, Garrett, to live a better life. Andy even involved Garrett in his training sessions with the Philadelphia Eagles unofficially. He had been assisting the strength and conditioning coach of the Eagles in their training camp.

Sadly, one day while on camp, Garrett was found dead in his room at Lehigh University. The police gathered needles, syringes, a spoon, and drugs from his room. He was slumped over dead in the chair of his room. Meanwhile, her other son, Britt, has also struggled with drug addiction and alcoholism.

Andy Reid’s Wife Is A Social Activist And Helper

Tammy Reid has gone through a lot of ups and downs in her life. She has suffered the grief of her first child passing away. But, Tammy is a very strong woman with a golden heart. When her husband, Andy, worked with the Philadelphia Eagles, she led a community against domestic violence as one of the lead activists.

Furthermore, Tammy started an organization named Laurel House to stand up against domestic violence. Besides this, Tammy is also a very religious woman and an active member of The Church of Jesus Christ of Latter-day Saints. In addition, Tammy frequently organizes charitable events in her church among youth groups and women’s organizations. Andy even converted himself into a Mormon for Tammy.

We wish the couple all the best for their future.