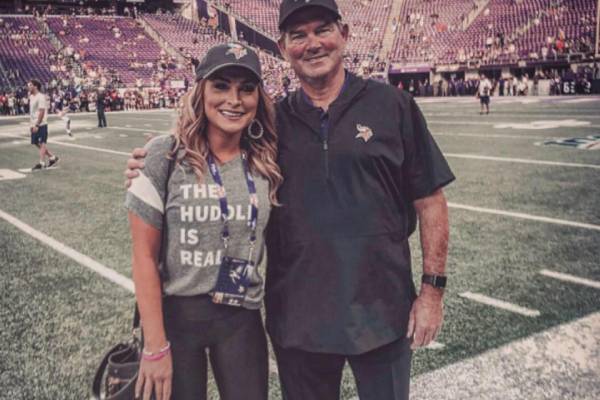 Having led many National Football League (NFL) teams to their victories, coach Michael Zimmer is not a new name in the sports industry. Still, for those who are unfamiliar with Mike Zimmer, he is an American football coach who led the NFL’s Minnesota Vikings for eight seasons.

Zimmer recently became the center of media attention when the Vikings unexpectedly fired him and general manager Rick Spielman. It goes without saying that his admirers were enthralled. Among many who stood up for the coach, some were his own family members.

Mike Zimmer’s daughter, Corri Zimmer, shared her thoughts on the matter and praised her father on Facebook. From the post, it is evident that Corri has been a lifelong supporter of her father and will always have his back.

The message tugged at the hearts of many, who have now developed an interest in getting to know her better. So let us learn about coach Mike Zimmer’s kid and see if she has any interest in football.

One Of Mike Zimmer’s Daughters

Mike Zimmer and his late wife, Vikki Zimmer, first met while jogging at Weber State University in Utah. The two were instantaneously smitten by one another, and the college sweethearts married in 1982 after about a year of dating. The former head coach and his spouse welcomed three beautiful and talented children.

Their son, Adam Zimmer, was born on January 13, 1984, in Ogden, Utah. Adam served as the NFL’s Minnesota Vikings‘ co-defensive coordinator and linebackers coach. Sadly, Mike Zimmer’s son passed away in November 2022 at thirty-eight.

As previously said, the former Vikings’ head coach is not one to flaunt his personal life in front of the spotlight. He naturally raised his children away from the media’s influence. Consequently, the public knows little about the details surrounding Corri’s upbringing.

We can still assume that Mike and his late spouse raised her well, seeing as she has grown up to become a talented and empowering woman. Likewise, while Corri frequently attends the football matches her father coaches, she has yet to be directly involved in the sport.

So, let us wish Mike Zimmer’s daughter well and hope that she continues to thrive in her life.

Vikki Black was a selfless and doting mother to her kids. So we can only imagine how excruciatingly heartbreaking it must have been for the celebrity kid to lose someone so dear to her suddenly. Furthermore, Mike Zimmer’s daughter frequently shares beautiful memories of themselves on social media.

Despite their loss, the Zimmer family keeps her memory alive by helping others in need through The Mark Zimmer Foundation. Corri currently works here and runs the foundation, keeping her mother close to her heart.

Mike Zimmer’s child received her primary education from Carroll Senior High School. She then attended Texas State University and graduated with a degree in Mass Communication/Media Studies in 2013.

While still at the university, Corri interned in ESPN Austin for almost a year. She then worked in the producer’s department at NFL Films from March 2015 to March 2016.

At present, Zimmer’s kid serves as the Executive director at The Mike Zimmer Foundation.

Sadly, in a Facebook post, she revealed that the foundation is coming to an end and that she is deeply saddened by it. Still, she has aided many people in achieving their goals during her time there.

So, we wish Corri Zimmer the best and hope she has a bright future ahead of her.

Talking about her personal life, Mike Zimmer’s daughter enjoys a blissful marital life. Corri walked down the aisle in a stunning wedding gown with her long-term boyfriend, Loy White, on June 25, 2017. According to sources, the lovebirds met in 2012.

Corri and her husband have been living in marital bliss since they tied the knot in 2017. The married pair enjoys traveling to new places and engaging in adventurous things.

Since their marriage in 2017, the couple seems to be living a joyful married life together. The married couple has also welcomed twin boys, Bodie White and Nash White. Corri Zimmer White is a doting mother and frequently shares adorable pictures of her little ones on social media.

Corri and her family currently live in Southlake, Texas, and enjoy a comfortable life together. Going through the pictures on White’s Facebook, it looks like she’s all set to teach her boys about football as they grow older.

So, Mike Zimmer’s grandchildren may one day grow up to become great athletes in the future. If they do, everyone will be delighted to see them thrive on the football fields.

Having Irish origins, the name Corri means maiden or the hollow.