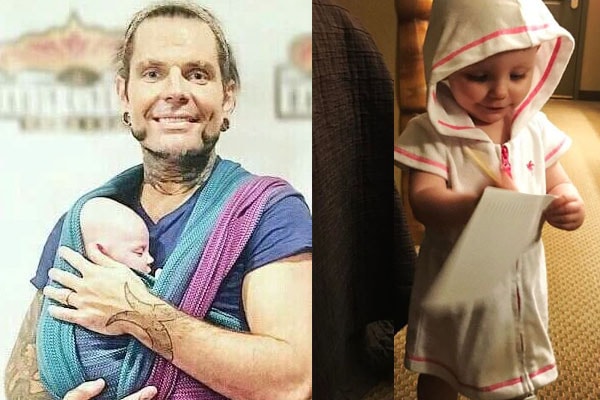 The cute Nera also has a lovely elder sister named Ruby Claire Hardy. Jeff Hardy’s eldest daughter and Nera Quinn Hardy’s elder sibling was born on the 19th of October 2010. The family of four lives a happy life together.

When Jeff Hardy’s daughter Nera Quinn Hardy arrived into this world, Beth Britt Hardy took onto her social media handle to welcome her little girl. It was after a week that Jeff and Beth announced the arrival of their newborn.

Nera Quinn somewhat resembles her elder sister Ruby Claire. The fair complexion suits both the daughters of Jeff Hardy and looks like both loves to dress the same as one another.

We are not sure about her elder sister Ruby, but the little Nera has already stepped into the wrestling ring. Now only time will let us know that if Jeff Hardy’s daughter Nera Quinn Hardy is destined to be a great wrestler like her father or not. Alongside having a lovely bond with her parents and elder sister, the cute Nera also has got a loving relationship with her grandfather Gilbert Hardy. And looking at Jeff Hardy’s father Gilbert, he too adores his little granddaughter a lot.

According to Jeff, his little girl Nera has already started writing lyrics. Plus she is too occupied in being adorable.

The name Nera has a Hebrew origin. In Hebrew, it means a candle or light.

As for the name Quinn, it was derived from the Irish surname “O’ Quinn” which is descendant of Conn. And Conn means intelligence and wisdom.

My family in Brooklyn…❤❤❤ pic.twitter.com/ckwadPPUeJ