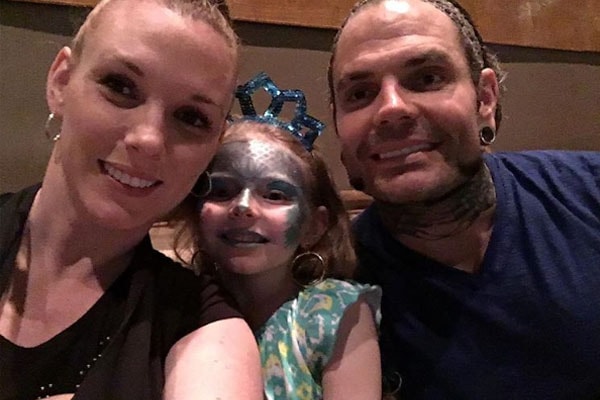 Jeff Hardy‘s daughter Ruby Claire Hardy was born on the 19th of October 2010. Ruby Claire is the eldest daughter of wrestler Jeff Hardy. Jeff had his daughter with his wife, Beth Britt.

Ruby is not the only child in the family. She has a younger sister named Nera Quinn Hardy. Jeff Hardy’s youngest daughter Nera Quinn was born on the 31st of December, 2015.

Many of us know that Jeff Hardy is a big fan of painting and whenever he enters into the ring his face and the whole body is colored in different paints. And looking at that, it seems that the gorgeous daughter of Jeff Hardy, Ruby Claire Hardy also has got similar interest. While celebrating Dr. Seuss Week, the little Ruby went as the famous fictional character The Grinch. We can presume that her father Jeff did most of her painting. We have to admit though; she looks terrifyingly good.

Alongside that, the father-daughter duo of Jeff and Ruby tend to spend a lot of time together. Like painting, they also share a common interest in baseball. Jeff Hardy’s Instagram is filled with photos of his face paints, but once in a while, he uploads videos of him playing with daughter Ruby too.

Jeff Hardy was also the partner of his daughter Ruby Claire Hardy for the Winter Wonderland Father Daughter Dance 2018. Not just her father, Ruby is also very close with her mother Beth Britt and sister Nera Quinn. Not just that even her mother Beth Hardy admits it that the gorgeous Ruby is fearless and she got it all from her father, Jeff. Now only time will let us know if Ruby will be a wrestler like her father Jeff or not.

My fearless babe. She gets it from her Dad. @JEFFHARDYBRAND pic.twitter.com/Jcn9QMSMpM

The name Ruby is derived from ‘ruber,’ a Latin word which means red. Plus it is also a gemstone. It’s just a coincidence but the name of one of wrestler Edge’s daughter is also Ruby (Ruby Claire Hardy), and her mother’s first name is also Beth.

As for the name Claire, it is derived from the Latin adjective “Clarus” which means clear or bright.