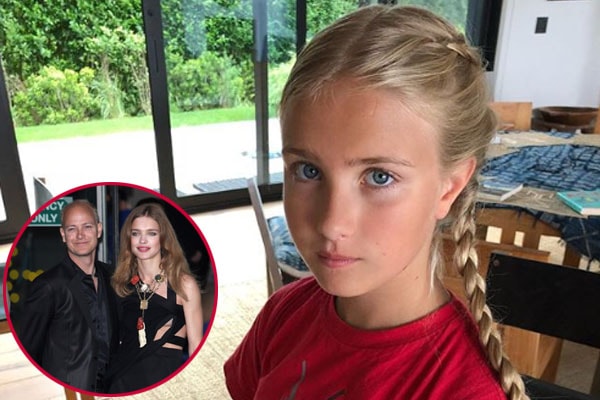 The Russian supermodel Supernova aka Natalia Vodianova‘s daughter Neva Portman was born on the 24th of March, 2006. The small Neva weighed in at 7 pounds during the time of her birth. Natalia had her daughter Neva with her ex-husband Justin Portman.

The cute Neva Portman is the only daughter of Natalia Vodianova till date. She has got two brothers named Lucas Alexander Portman and Viktor Portman, and two younger half-siblings named Maxim Arnault and Roman Arnault. Roman and Maxim are Natalia Vodianova’s kids with partner Antoine Renault.

Not many people know this but the 12-year-old daughter of Natalia Vodianova, Neva Fortman has already begun her modelling career. In May 2012, Fashionista published news stating that after a little modelling hiatus Neva had landed her first campaign. At that time, Neva posed for Caramel Baby and Child, a childrenswear label.

Well to be precise, it wasn’t the first time for Natalia Vodianova’s daughter Neva Fortman. On October 2006’s issue of French Vogue, Neva was on the cover page and made her modelling debut back then. She was just seven months old at that time. So we can say that Neva Portman was literally born as a model.

Being one of the tops in the Fashion industry we wonder if Natalia shares some tips and tricks with her daughter Neva or not.

Neva has also got an Instagram account which is on Private and has just got 50 followers as of December 2018. The number of followers is sure to increase in the coming days.

Alongside spending time with her family, it looks like Neva also loves to play around with her pets. As stated above that Neva’s Instagram is on private, but while going through her father Justin’s Instagram .account, we can see that Neva has got more than one pet. Plus last Christmas Justin Portman gave his daughter Neva a cat, and she seemed delighted to receive it.

The name Neva is said to be derived from the Latin word ‘Nivis’ which means snow. Many sources suggest to us that Natalia and Justin named their Neva after the river Neva of Russia.