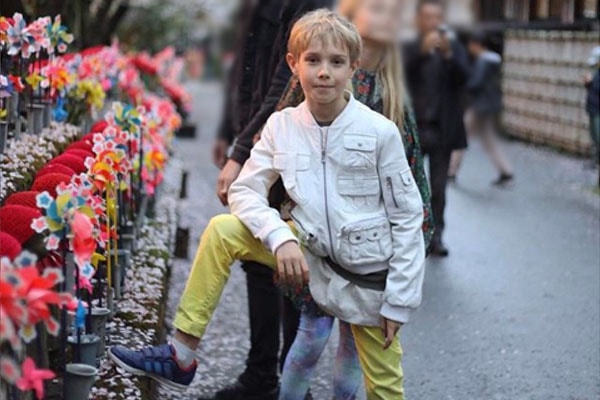 The Supernova aka Natalia Vodianova‘s son Viktor Portman was born on the 13th of September 2007. Natalia had her son Viktor with her ex-husband Justin Portman.

Viktor Portman is not the only child of Natalia and Justin. Viktor has got an elder brother and a sister named Lucas Alexander Portman and Neva Portman respectively. Along with that Viktor has also got two younger half-siblings named Maxim Arnault and Roman Arnault.

Viktor Portman Has Got A Lovely Bond With His Family Members

It looks like Viktor Portman is that guy in the family who has got a beautiful bond of relationship with everyone. And furthermore, it seems like he loves spending time with his loved ones. He is often spotted having fun with his either parents. At times Natalia Vodianova’s son Viktor is seen with his father doing summersault on a trampoline, and at times he is occupied enjoying a football match with his mother and brother.

Not just in their homeland, the little Viktor also loves travelling overseas. One time he went to Japan for a vacation with his family, and it looked like he enjoyed it a lot.

Despite having social media account of his own which is private at the moment, you can find plenty of photos of Viktor Portman on his parent’s social media handle. Now let’s see if Viktor Portman will also choose a career in modelling and reach the top like his mama, Natalia.

Going through the pictures of Viktor Portman, what we have found out is that he is a great fan of soccer. And Ligue 1’s Paris Saint-Germain (PSG) seems to be his favourite soccer team. His father Justin uploaded a photo of his alongside PSG’s forward Neymar Jr, and the handsome Viktor looked delighted to be beside him.

Nobody has seen the future so the little Viktor Portman could also grow up to be a professional footballer.

The name Viktor has a Latin Origin in which it means the conqueror.