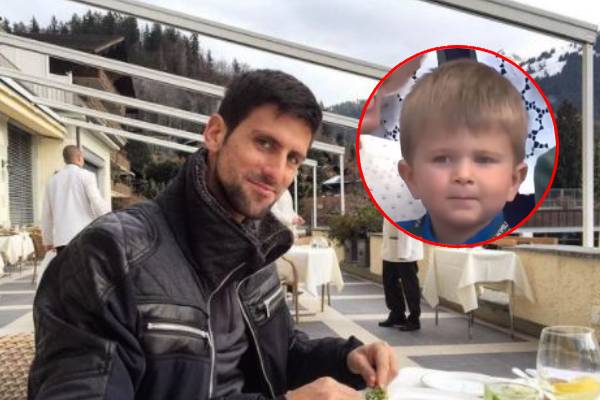 Novak Djokovic is a tennis player from Serbia who has won 20 Grand Slam singles titles to date. He is one of the most famous and successful tennis players globally. Because of the exemplary records that Novak has maintained, he is considered one of the greatest players of all time.

With the growing fame, Novak also has a huge fan following worldwide. Moreover, being a celebrity, it is common for your fans to surround you everywhere you go. Just like that, Novak’s fans are also curious to know what his personal life is like.

The successful tennis player has two kids, a son, and a daughter, with his beautiful wife. In this article, let’s learn in detail about Novak Djokovic’s son and how he is growing up.

As mentioned earlier, the famous tennis player Novak Đoković and his wife Jelena Ristic have two children, a son and a daughter. Novak Djokovic’s little boy, Stefan Đoković, is the eldest of the Djokovic kids and was born in October 2014.

In April 2014, tennis star Novak announced on social media that his fiancee was pregnant with their first kid. Six months later, in October 2014, they welcomed the little one and shared the news via Twitter.

The tennis player wrote that their baby angel was born. He also exclaimed that he was proud of his wife and even thanked everyone for their love and support.

Moreover, Stefan Djokovic’s parents had exchanged their vows only three months before his birth, in July 2014. They had gotten engaged in September 2013. The arrival of their baby boy must have added more happiness to the life of the newly married couple.

As stated earlier, Novak Djokovic’s son, Stefan Đoković, is his eldest child with Jelena Đoković. Three years after his birth, in September 2017, his younger sister, Tara Đoković, was born. Stefan’s parents shared the exciting news with their fans via Instagram.

While Jelena was pregnant for the first time, Novak had shared the news of the pregnancy. But the second time around, neither Jelena nor Novak shared anything about the pregnancy.

Moreover, according to Novak’s post announcing the arrival of their baby girl, Stefan was excited about being a big brother. The tennis player also talked about how his son was eager to join in on the baby duties.

Stefan seems to love his younger sister, Tara Djokovic and both the Djokovic kids must be having a pleasant time growing up together.

In September 2021, Novak Djokovic’s eldest child, Stefan Djokovic, entered primary school in his homeland Serbia. Stefan’s parents decided to enroll him in the school in Serbia because they wanted him to enjoy his childhood as much as possible with zero burdens of traveling to different places time and again.

Similarly, a source familiar with Djokovic’s plan mentioned that the school in which Stefan studies have classes in Serbia, and those classes do not last for 45 minutes. Similarly, parents are also involved in education, and kids also develop creativity. Moreover, there are no bells in the institution, and teachers teach kids to have critical thinking and apply knowledge in practice.

The Djokovic couple has expected Stefan to learn about everything, including Serbian culture and history. Nevertheless, let’s hope the little one has a great time during his school days.

Stefan Đoković is growing up in a family where his dad and uncles are tennis players. Novak Djokovic’s son has seen them play and their dedication to the sport. So, it is no surprise that the tennis star’s kid is also interested in the sport.

In an interview, Stefan’s dad, Novak, mentioned that he likes playing tennis. But the 20-times Grand Slam winner stated that he would not force Stefan to play or come to the court as the process happens spontaneously and naturally day by day.

In June 2021, Stefan’s dad practiced with him ahead of Mallorca Open. While hitting some balls together, Novak reminded his team that Stefan’s forehand swing was like Rafael Nadal‘s.

Novak’s boy has watched him play live only a couple of times. Tennis.com has claimed that he watched his dad live for the first time at Wimbledon in 2018. Watching his father play tennis for several years and his achievements might be inspiring for Stefan to follow in his papa’s footsteps.

Who knows, in the future, Stefan might become a tennis player like his dad and find even more success. We still have a lot of time to know that. Nonetheless, we hope Novak Djokovic’s son has a successful life ahead.

The name Stefan has a German origin, and it means Crown.