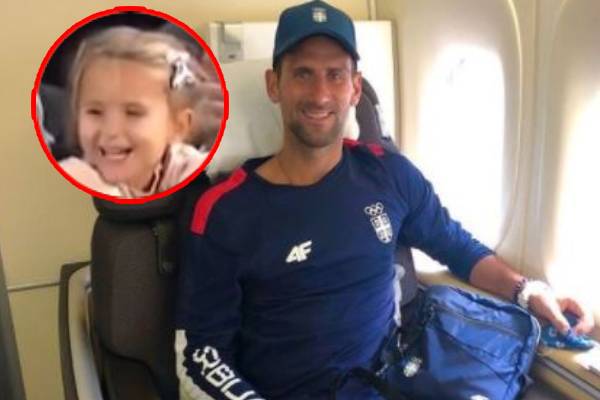 Tara Djokovic is the youngest one in the Djokovic family. Image Source: Novak Djokovic Instagram.

Novak Djokovic is a tennis player from Serbia whom the Association of Tennis Professionals (ATP) has ranked as world No.1 on multiple occasions. In his more than two-decades-long tennis career, Novak has won several tournaments, making him one of the greatest in the game. Furthermore, his exemplary playing skills have helped him gain significant fame and fortune.

Because of his fame, the public has always remained curious about Djokovic’s personal life. Moreover, the player is considered one of those famous sports personalities who keep their personal lives private, away from the media. But many know that he is the doting dad of two kids, a son, and a daughter.

So, in this article, let’s learn in detail about Novak Djokovic’s daughter and find out how she is growing up.

Youngest One In The Djokovic Family

As mentioned earlier, the successful tennis player Novak Đoković has a son and a daughter with his wife, Jelena Ristic aka Jelena Đoković. In September 2017, Novak Djokovic’s daughter, Tara Đoković, was born. Her dad and mom shared the news of her birth via an Instagram post.

However, prior to the announcement, they had not revealed anything about the pregnancy.

While sharing the news, Tara’s dad sent his love and admiration to every women who went through immense pain and effort to create life, bring life, and raise a human being. He also stated that Jelena and the little one are his angels and the family had returned home from the hospital.

Djokovic also thanked his fans and followers for their love and best wishes.

As mentioned earlier, Tara Đoković is the youngest one in the Djokovic family. She has a brother who is only three years older than her.

In April 2014, Tara Djkovic’s dad, Novak, uploaded a photo of him and her mother, Jelena, and announced their pregnancy. Her parents had gotten engaged in September 2013.

Two months after announcing the happy news, on July 10, 2014, the duo wed in an intimate ceremony attended only by their friends and families.

Moreover, Tara’s parents did not even share their wedding pictures on their social media pages, and during their wedding ceremony, no one was allowed to use their phones. Three months later, in October 2014, Tara Djokovic’s elder brother, Stefan Djokovic, was born.

Tara’s dad shared the news via Twitter. Novak Djokovic’s daughter Tara and her elder brother Stefan Đoković must be having a wonderful time growing up together. And as the youngest one in the family, the little one must be the apple of everyone’s eyes.

Her Parents Have Not Revealed Her Face

As stated earlier, Tara Djokovic’s dad is extremely private regarding his personal life. He even made the staff, waiters, and employees of the resort where he got married to his long-time girlfriend sign a confidentiality agreement. So, it is no surprise that Novak is protective of his children’s identity.

Although Novak shared news about welcoming two kids with his wife, he has not revealed their faces yet. While uploading photos of both his children, he only shares the one where their face is not seen or covers their face with emojis.

Likewise, Tara Đoković’s mom also shares pictures and videos without showing her and her brother’s faces. However, during Paris Masters 2021, the face of Novak and Jelena’s kids was revealed by the media.

In November 2021, Novak Đoković’s daughter and son attended his game together for the first time. As he won the Paris Masters for the sixth time, he exclaimed that it was the first time both his kids had watched him play live.

Novak Djokovic celebrated his victory by hugging both kids. You can watch the adorable moment between the three below.

That was the first time, media and fans got to see the faces of Novak’s kids. Of course, being a celebrity, it must have been really challenging for him to maintain a personal life with that level of privacy. But, Novak and his wife seem to have carried that out swiftly.

Novak’s daughter is still too young to choose what career she wants to pursue. Nevertheless, we hope Novak Djokovic’s baby girl has a wonderful life ahead.

The name Tara has an Irish origin, which means Tower, Hillside.