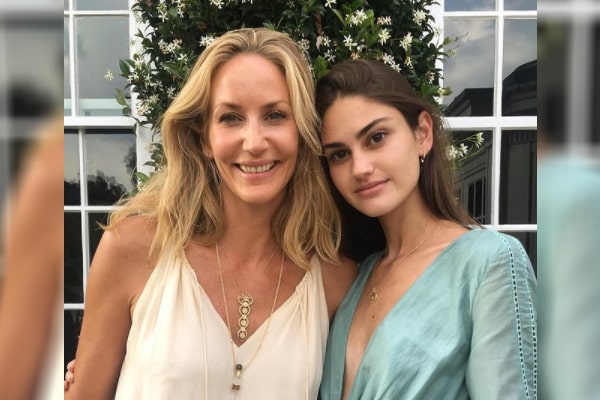 Lisa Butcher is a fashion model and television presenter who won ELLE’s Angles modeling competition in 1987. Having modeled for some notable names in the fashion industry, Lisa now runs her own jewelry collection named Eden Collection.

Although Lisa has a victorious career as a model, it is quite the opposite of her personal life as she has gone through many ups and downs. However, she is a proud mother of two gorgeous daughters, Olivia Donoso and Amber Donoso, from her second marriage with Gabriel Donoso. Therefore, we shall be tailing Lisa Butcher’s daughter, Olivia Donoso, who shares a striking resemblance with her.

Aforementioned, the English model Lisa Butcher’s career as a model and tv presenter is bliss. But her marital life had tragic ends. However, she was blessed with two wonderfully beautiful daughters with her late husband, Gabriel Donoso.

Lisa Butcher’s daughter, Olivia Donoso, who goes by Oli Donoso, is the youngest in the family. Her parents had a secret wedding and welcomed their two bundles of joys without any public fanfare. Both Lisa and Gabriel kept their personal lives away from public scrutiny and raised Olivia and her sister, Amber Donoso, with great care.

Oli Donoso is half Chilean and half British. The bi-cultural beauty spent a couple of years in Chile but moved to the UK and grew up in London. While talking to Vogue, Olivia revealed that while growing up she was surrounded by both cultures and still adores both of them.

Olivia Donoso Lost Her Father In 2006

Although there isn’t much about Lisa Butcher’s baby girl, Olivia, we know that she grew up surrounded by horses. Given that Olivia Donoso’s father was one of the most competitive polo players of all time, it is only natural for her to take an interest in horses. He also won the Coronation Cup in 2004 and received the award from Queen Elizabeth.

Unfortunately, Olivia lost her father in November 2006. He suffered multiple injuries during a match in Argentina and passed away a few days later in a hospital in Buenos Aires.

Despite the massive loss, Lisa Butcher’s daughter, Olivia Donoso, appreciates her time with her father. She further reminisces their moments on Instagram once in a while. A heartbreaking yet motivational loss has allowed Olivia to explore herself and continue her mother’s legacy as a model.

Not every child follows their parents’ footsteps, but Olivia Donoso chose to come out of her mother’s shadow and make a name for herself as a model. The 26-years-old girl, Olivia, is now a professional model represented by Established Models.

Furthermore, Olivia boasts over three thousand followers on Instagram. She often shares some jaw-dropping selfies and beautiful moments captured with her mother. Standing tall at 5’11”, Olivia is the epitome of beauty. Furthermore, she has the grace of high-end fashion models and could easily succeed in the fashion industry in the coming days. Moreover, Oli’s mother revealed that both her daughters wanted to be a model and were scouted by numerous agency.

Likewise, Oli is also associated with The mgmt, The Syndical, Monster, etc. She has also appeared and talked with Vogue, where she revealed that luxury is not her taste.

During an interview with The Ones 2 Watch, Olivia, aka Oli, revealed that people are surprised by her twisted sense of humor. Moreover, If given the opportunity, she would hang out with Ed Sheeran, Kurt Cobain, and Audrey Hepburn. Furthermore, before modeling, Lisa Butcher’s daughter completed her studies.

Despite losing her father and going through some other hardships, Oli Donoso remains humble. She is also very close to her mother and sister, Amber. While she often shares her moments with her Instagram followers, Oli still keeps her life confidential. Furthermore, the model seems to be possibly single at the moment. However, whoever will end up being Olivia Donoso’s boyfriend or lover, the person will be a fortunate one.

Thus, with the growing popularity and success, let’s hope to see more of Lisa Butcher’s baby, Olivia Donoso, in the coming days.

The name Olivia means olive tree and has a Latin origin.