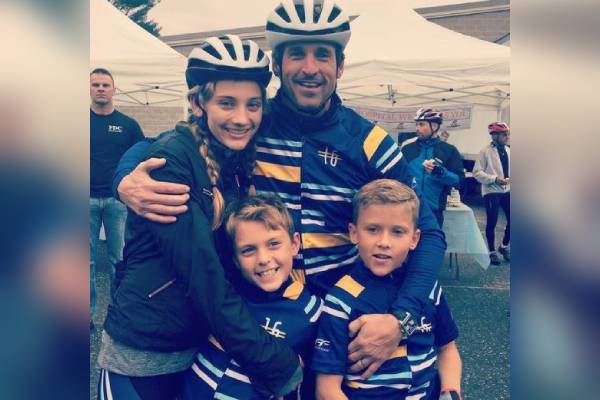 The handsome and talented American actor and race car driver Patrick Dempsey is enjoying his comfortable lifestyle with his wife and three children. Apart from his exemplary professional career, his personal life is also filled with happiness. He has amassed enormous fame and fortune to his name, which has allowed him to afford a lavish lifestyle.

Dempsey, widely recognized for his role as neurosurgeon Derek “McDreamy” Shepherd in ABC’s popular medical drama series Grey’s Anatomy, shares a beautiful married life with his wife, Jillian Fink. They together are proud parents of a daughter and twin sons.

For now, let’s get to know more about Patrick Dempsey’s children.

His Eldest Child Is A Daughter

As mentioned earlier, Patrick shares a blissful marital life with Jillian Dempsey, with whom he has been married since July 31, 1999. In their marriage, they welcomed three beautiful children. Among them, Talula Fyfe Dempsey is the adorable couple’s first child. She is the only daughter of the pair and was born on February 20, 2002.

Patrick Has A Set Of Twins

Five years after Talula’s birth, Patrick and his wife welcomed their twin sons, Sullivan Patrick Dempsey and Darby Galen Dempsey, on February 1, 2007. The twin brothers are the youngest in the family and are pampered by all.

Patrick Dempsey’s children have got a great sibling bond and they love and take care of each other.

Well, Patrick Dempsey’s kid, Talula, is one of those people who loves to try new cuisine and travel around the world. The nineteen-year-old beautiful Talula has an Instagram account named curiouscravingz, where she uploads several pictures of different types of foods.

Similarly, Talula is also fond of traveling, and she has been to several countries like Spain, Italy, and Japan. As a food enthusiast, she must have tried every delicacy from the places she has been to. In one of the interviews, Patrick revealed that Talula loves cooking, and her Instagram is evidence that she might become a great cook in the future.

Furthermore, Talula is often seen hanging out with her dad, and the duo is often seen shopping and having a great father-daughter time. But since she moved to Washington for her university, the adorable duo has not been spotted much.

Patrick’s Twin Children Seem To Be Have Different Passion

Patrick Demsey’s son, Darby Galen Dempsey, is a soccer enthusiast. In one of his Instagram posts, Patrick uploaded a picture of his son, wearing a jersey with his name. Darby’s parents are proud of him and his passion for playing soccer. Who knows, he might become a great soccer star in the upcoming days.

Furthermore, Patrick Demsey’s other son, Sullivan Patrick Dempsey, has a different passion than his brother. In an interview with People, Patrick mentioned that Sullivan wants to be an actor like him. The good look and bubbly personality might become a great help to become the next Hollywood star. Who knows, he might become even famous than his father.

As mentioned earlier, Patrick Demsey’s kids have a good bonding with each other. The twin brothers are often seen having a lovely time with their sister and parents. During the pandemic, Darby and Sullivan attended virtual classes while their sister is in Washington.

Patrick and Jillian are raising their children in a loving environment, and they are proud of their kids. Their little ones seem to be having a great time growing up. We wish the family remains happy forever and also hope to know more about Patrick Dempsey’s children in the future.

Talula Fyfe Dempsey – The name Talula has a Native American Indian origin, which means “Leaping water.” Similarly, the name Fyfe is a boy’s name and has Scottish origin, and it means “From Fifeshire.”

Darby Galen Dempsey – The name Darby has an English origin, which means “The deer park farm.” Furthermore, the name Galen has a Greek origin, and it means “Calm.”

Sullivan Patrick Dempsey – The name Sullivan has an Irish origin, meaning “Dark-eyed.” Moreover, the name Patrick has an English origin, and it means “Nobleman.”