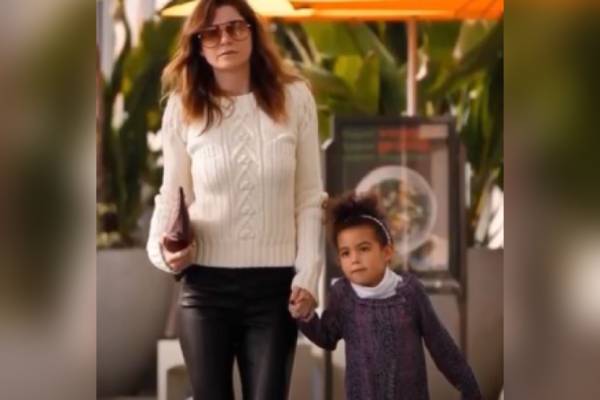 Ellen Pompeo has three children and Sienna May is the middle child among them. Image Source: Social Media.

The American actress and producer Ellen Pompeo is a doting mother of three children. The 51-year-old beautiful actress loves to spend quality time with her husband and children. Besides having an exemplary acting career, Ellen is also a successful wife and a loving parent.

The talented and beautiful actress is married to an entrepreneur, Chris Ivery. The duo has been married for quite a long time now. And in their several years of togetherness, they welcomed two lovely daughters and a son.

For now, let’s learn about Ellen Pompeo’s daughter, Sienna May Pompeo Ivery, and her whereabouts.

Sienna May Was Born Via Surrogacy

Sienna May Pompeo is the second-born child of the lovely couple, Ellen Pompeo and Chris Ivery. Her parents, Ellen and Chris got married on November 9, 2007, in an intimate ceremony, after getting engaged in June 2007. Sienna was born in August 2014 via surrogacy. However, her mother shared the happy news two months after her birth, in October 2014.

Furthermore, Ellen disclosed the truth about surrogacy through an interview on ABC’s Jimmy Kimmel Live! She even wrote on her Twitter and thanked the whole ShondalandTV family for helping them enjoy their first few weeks privately. Sienna’s parents are raising her with great love and care.

As mentioned earlier, Sienna is not the only child of her parents. She has one elder sister, Stella Luna Pompeo Ivery, and a younger brother, Eli Christopher Pompeo Ivery. Sienna’s elder sister, Stella, was born on September 15, 2009. Similarly, Sienna’s brother was born in December 2016. Ellen and Chris are up-bringing their kids well. Sienna seems to be having a great time growing up with her siblings.

In April 2020, Ellen uploaded an adorable video, where Sienna tells her mom that 3-year-old Eli has been “testing her.” When Ellen asked her who keeps testing her, Sienna replied that her brother keeps testing her. Ellen Pompeo’s daughter added that even when she was 4, he tested her, and even now when she’s 5, he still tests her. She added that she should separate because her brother tests her every day. Nevertheless, young Sienna shares a close bond with her siblings and also has similar features.

Sienna May’s mom, Ellen Pompeo, is a popular actress and producer from Massachusetts, USA. She gained prominence through her role as Meredith Grey in the popular American medical drama television series Grey’s Anatomy. Besides that, she also has acting credits in several other television series like Law & Order, Station 19, Friends, The Job, etc., and movies like Life of the Party, Old School, Daredevil, Coming Soon, Moonlight Mile, etc. As a result, Sienna’s mama, Ellen Pompeo’s fortune is $80 million.

Sienna May’s father, Chris Ivery, was a music producer based in LA. He has worked as a music producer in the music industry for 25 years. In his career, Chris also served as a co-writer for Rihanna’s 2010 song, Cheers (Drink to That). The song was later performed in a 2012 episode of Smash.

After working in the music industry for 25 years, Sienna’s dad changed his profession and launched a clothing line called STLA in 2019. He is a longtime fan of the classic Italian sportswear label Sergio Tacchini and thus wanted to have the brand in the stores in the USA. So, Ivery reached out to the team of Sergio Tacchini to relaunch the label in LA, and hence the STLA collection was created.

While Sienna May Pompeo Ivery’s mother has found immense success in her career, she seems to have found inspiration from another popular woman. The Grey’s Anatomy star once shared a video of Sienna where she said she wanted to be like former First Lady Michelle Obama. She also added that Michelle is nice and she wants to make the world a better place by being nice like her.

Sienna’s inspiration, Michelle saw the video and took the time to comment on it. Obama said that Pompeo Ivery’s words made her day. She even asked Ellen to convey her message to Sienna that she’ll be able to change the world and make it a better place.

Ellen and Chris’s daughter, Sienna is quite young to choose a career yet. She might follow in one of her parents’ footsteps and might become successful like them. Or maybe she will become the future Michelle Obama, only time will tell. We can only hope the little one finds success in her life.

The name Sienna has an Italian origin which means “Reddish Brown.” Similarly, the name May has an English origin, which means “Goddess Maia Or Family of Matthew.”