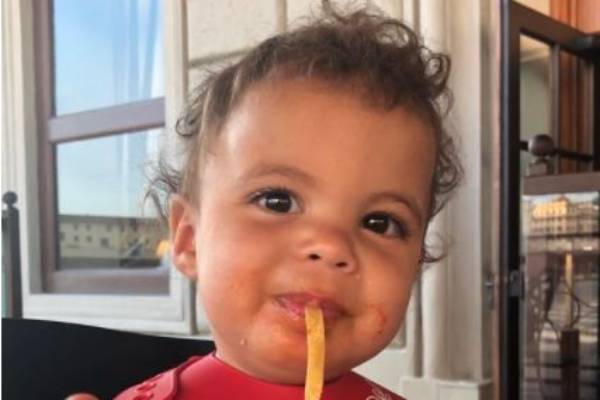 Besides having exemplary acting skills, Ellen Pompeo is also a successful wife and a doting mother of three children. She first came into prominence for her role as Meredith Grey in popular ABC’s medical drama series, Grey’s Anatomy. Apart from successful professional life, she seems to be enjoying her personal life with her husband, two daughters, and a son.

The beautiful actress shares a blissful marital life with former music producer Chris Ivery. The lovely pair of Ellen and Chris are doing great for themselves and are raising their children with great love and care.

As stated earlier, the talented actress shares a beautiful marriage with the former music producer, Chris Ivery. The duo that met in 2003 at the grocery store in LA began dating after six months. After dating for almost 4 years, the adorable couple exchanged vows on November 9, 2007.

Nine years after, Ellen welcomed her third kid, Eli Christopher Pompeo Ivery, in December 2016. They shared the news of her son’s birth through an Instagram post. She also shared a video of herself gracefully swaying with him during the 2020 New Year. She captioned the video as “Boy Crazy” and wished her fans a Happy New year.

Ellen is gracefully handling her mommy duties and her professional career. Eli Christopher Pompeo Ivery’s parents are raising him with great love and care.

Eli Christopher is not the only child of his parents. As the youngest child, Ellen Pompeo’s son is growing up with immense love from his parents and two big sisters. On September 15, 2009, Eli Pompeo’s mother gave birth to his eldest sister, Stella Luna Pompeo Ivery. His elder sister has attended several Hollywood events with their mother.

Five years after Stella’s birth, Ellen and her husband welcomed their second daughter, Sienna May Pompeo Ivery. Eli Christopher Pompeo Ivery’s second eldest sister was born via surrogacy in August 2014. His parents disclosed the news of their daughter two months after her birth.

Ellen’s son, Eli, seems to be having a lovely childhood growing up with both of his siblings. And looking at their pictures, it looks like the youngest Pompeo-Ivery family member has similar hair to his siblings.

His Parents Are Reputed Actress And Music Producer

Just like her actress mother, Eli Christopher Pompeo Ivery’s dad, Chris Ivery, is also involved in the entertainment business. He worked as a music producer for twenty-five years. In that period of time, he even worked as a co-writer for Rihanna’s 2010 song “Cheers (Drink to That).” In a 2012 episode of NBC’s Smash, the song was performed.

After working in the music industry for 25 years, Eli’s father changed his profession and began a clothing line called STLA. Sergio Tacchini is an Italian sportswear label, and he was a longtime fan of the brand. After having a hard time finding the brand in the stores in the USA, he reached out to the team. The team approved his idea to relaunch the label in LA, and hence STLA Collection was started.

On the other hand, Pompeo Ivery’s mother, Ellen, has continued to act in many projects. Her titular character Meredith Grey, in a popular ABC’s medical drama series Grey’s Anatomy. Besides that, she has acted in dozens of other movies like Life of the Party, Undermind, Mambo Cafe. Coming Soon, and many others. She has amassed a fortune of $80 million from her career.

Moreover, Eli Pompeo’s parents have made a huge fortune to their name in their respective careers. He might also follow in his parent’s footsteps, and if he does, he might get significant success like them. Well, time will surely tell us about this.

Ellen Pompeo’s son, Eli, seems to be enjoying his childhood while growing up with his two sisters. Stella and Sienna love their brother and care about him a lot. As compared to her daughters, Ellen has not posted much about her son. Let’s hope we get to know more about them in the future.

The name Eli has a Hebrew origin, which means “Height.” Furthermore, the name Christopher has a Greek origin, and that means “Christ-bearer.”