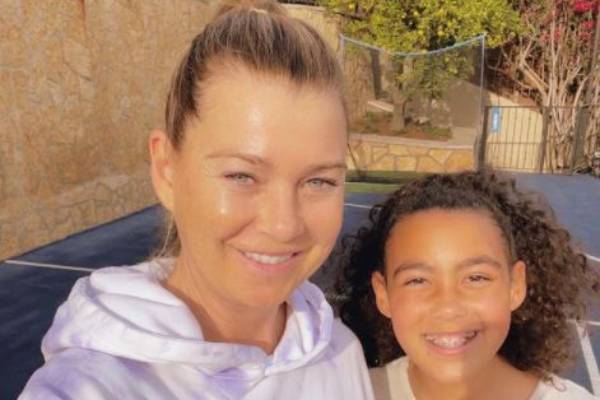 The beautiful American actress and producer Ellen Pompeo is enjoying her life comfortably and happily with her family. The mother of three children is exemplarily handling her professional life and mom life. The fame and fortune that she has accumulated to her name have helped her become able to afford a lavish lifestyle.

Ellen Pompeo, popular as the Meredith Grey from Grey’s Anatomy, shares a blissful marital life with her husband, Chris Ivery, since November 9, 2007. The 51-year-old Pompeo is a successful mother and a wife.

Stella Luna Pompeo Ivery is the eldest and first child of the adorable pair, Chris Ivery and Ellen Pompeo. The duo who met at a grocery store in 2003 for the first time started dating six months later. After four years together, they exchanged vows in secret on November 9, 2007.

Two years after their marriage, Ellen gave birth to their first child, Stella Luna Pompeo Ivery, on September 15, 2009. Ellen, also known as one of those actresses preferring private life, has not talked much about her personal life and children.

However, she uploads several pictures of her daughter on her Instagram.

As stated earlier, Stella Luna is not the only child of the adorable couple of Ellen Pompeo and Chris Ivery. Five years after Stella’s birth, Ellen and her husband welcomed their second child, Sienna May Pompeo Ivery. In addition, Stella’s sister, Sienna, was born via surrogate in August 2014. However, her mother disclosed the truth only two months after her birth, i.e., in October 2014.

Furthermore, Stella’s parents welcomed their third child, Eli Christopher Pompeo Ivery, in December 2016. The doting parents are raising their children with great love and care. Stella loves her siblings and seems to be having a great time growing up with them. Stella and her siblings have similar hairs.

Stella Luna’s mother, Ellen Pompeo, is a renowned actress and popular in Hollywood. Ellen, who began her career by appearing in ads for different brands, is now one of the highest-paid television actresses. The turning point of her career came when she was cast as Meredith Grey in the popular ABC medical drama series Grey’s Anatomy.

Besides Grey’s Anatomy, Stella’s mother, Ellen, has also acted in different movies like Coming Soon, Catch Me If You Can, Daredevil, Undermind, Art Heist, and many others. Similarly, she has also appeared in series like Law & Order, Get Real, Friends, Repeat After Me, Station 19, and many others. Numerous acting projects, productions, and other ventures have resulted in her amassing a net worth of $80 million.

Before starting his career in the clothing line, Stella’s father, Chris, worked as a music director in the music industry for 25 years. As an LA-based music producer, he has also worked as a co-writer for Rihanna’s song, Cheers (Drink to That). The song, which was released in 2010, was later performed in an episode of Smash in 2012.

As stated earlier, after working in the music industry for 25 years, Stella’s father switched his career and began a clothing line named STLA in 2019. Chris reached out to the team of Sergio Tacchini, the classic Italian sportswear label, after he had a hard time finding the brands in the stores in the USA. He asked them to relaunch the label in LA, and hence the STLA collection was started.

Ellen’s daughter, Stella, is enjoying her childhood, growing up together with her siblings. In the future, she might also become an actress just like her mother or might become a music producer or start her own clothing just like her father. Nevertheless, we can hope that she become as successful as her parents.

Nevertheless, here’s to hoping to know more about Stella in the future.