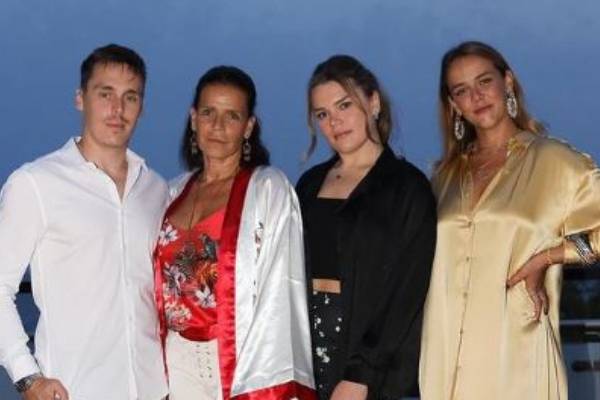 Princess Stephanie is the youngest daughter of Rainier III, Prince of Monaco, and the American actress, Grace Kelly. She has been a singer, fashion model, and swimwear designer.

Stephanie has been married twice in her life and is the doting mother of three kids. Today, let’s learn about Princess Stephanie’s children and their whereabouts.

As mentioned earlier, Princess Stephanie has been married twice in her life. She was first married to her former bodyguard, Daniel Ducruet. They began dating in 1992. The same year, on November 26, Stephanie gave birth to their firstborn, Louis Robert Paul Ducruet.

Princess Stephane’s son, Louis, attended Western Carolina University, North Carolina, from where he graduated in 2015 with a bachelor’s degree in Sports Management. After graduation, he took a salaried position as an international recruiter at AS Monaco FC. He had interned for the soccer club while completing his education.

In early 2019, the Vice-president of the club, Vadim Vasilyev, promoted Ducruet to his assistant. After working with Vadim, he then worked for his successor, Oleg Petrov. After working as an assistant to the club’s vice president, Princess Stephanie’s oldest child, Louis Ducruet, decided to leave the club in July 2020.

Louis announced his departure from the club via Instagram, where he mentioned that he was leaving his favorite club. He also stated that it was time to try a new challenge and a new adventure that allowed him to acquire more experience.

Moreover, in October 2020, Louis announced that he would be starting his new venture at the UK soccer club, Nottingham Forest. He signed a two-year contract with the club as the advisor for international projects.

In addition, he shared the news about his new venture through an Instagram post. We hope that he achieves significant success in his work at Nottingham Forest.

Princess Stephanie’s son with Daniel Ducruet, Louis Ducruet, shares a blissful marital life with his long-term partner, Marie Chevallier. The two met at a Cannes nightclub while studying at the Western Carolina University, where he specialized in Marketing and French Education, and she earned her Bachelor of Business Administration.

The couple began dating in March 2012, and six years later, Louis proposed to her in February 2018, to which she said Yes! They shared the news of their engagement via Instagram.

A year after their engagement, on July 26, 2019, they got married in a civil wedding at Monaco town hall.

Moreover, the pair also had a religious wedding that took place at the Cathedral of Our Lady Immaculate on July 27, 2019. Louis shared several photographs of their wedding ceremony.

Currently, the adorable pair is living a happy life with their dog, whom they named “Pancake.”

Apart from Louis, Princess Stephanie and Daniel Ducruet, also have a daughter together. Two years after the birth of their first child, the divorced pair welcomed their second-born, Pauline Ducruet.

Princess Stephanie’s daughter, Pauline Grace Maguy Ducruet, was born on May 4, 1994. A year after her birth, on July 1, 1995, Pauline’s parents Stephanie and Daniel tied the knot.

As a result of their marriage, both of Princess Stephanie’s children with Daniel Ducruet are included in the line of succession. However, their marital life only lasted a year and they divorced in October 1996.

Stephanie’s baby girl, Pauline, has been involved in the Fashion industry for quite a long time now. From 2012 to 2015, she was a stylist apprentice at the renowned fashion and design school, Instituto Marangoni, in Paris. Then, she enrolled at the Parsons School of Design in New York in 2015.

From there, Pauline received her Associate’s Degree in 2017. Then, she went on to work for several brands like Ivarson, Louis Vuitton, and VOGUE.

Then in 2018, she founded her own label Alter Designs, which focuses mainly on unisex clothes and is a gender-neutral brand.

Ducruet seems to be doing great at her job, and we hope that she finds more success in the fashion industry.

Princess Stephanie’s daughter, Pauline, is in a relationship with her long-time friend turned boyfriend, Maxime Giaccardi. The love birds have known each other for a long time and seem to be deeply in love with each other.

Furthermore, a real estate entrepreneur, Maxime often accompanies his girlfriend to several events and ceremonies. The adorable pair is yet to tie the knot. But let’s hope we get to hear some good news soon.

Aforementioned, after the birth of their two kids, Daniel and Stephanie got married and separated in the span of a year. They divorced each other when the tabloids published some photographs of Daniel with Muriel Houtteman, a Belgium model.

Two years after her divorce, Princess Stephanie welcomed her third-born, who is also her second daughter. On July 15, 1998, she gave birth to her daughter, Camille Gottlieb, with her former boyfriend and bodyguard, Jean Raymond Gottlieb.

The Princess of Monaco did not reveal who Camille Gottlieb’s father was at the time of her birth. However, confirming what many speculated for years, Stephanie’s younger child acknowledged Jean Raymond as her dad.

Moreover, despite being the offspring of Princess Stephanie, unlike her half-siblings, Louis and Pauline, Camille does not have succession rights. This is because Camille’s parents never married.

Founder Of Be Safe Monaco

Stephanie’s youngest kid, Camille, is the founder of Be Safe Monaco. It is a Monegasque Association, which she created in October 2017 along with Charlotte Marsan, Andrea Puzar, Margaux Grundstein, and Laura Dias.

A post shared by BE SAFE MONACO 🇲🇨 (@besafemonaco)

Their program consists of educating and preventing young people and their parents from drinking and driving. In addition, Camille and her friends have been running the organization intending to inform, communicate and implement awareness programs.

Furthermore, they also succeeded in making a free shuttle available to every people in the port of Monaco during the summer weekends from the 5th of July 2019 to the 31st of August 2019. Gottlieb seems to be doing great work through the organization.

Like her mother, Camille has also been involved in several other humanitarian works. Furthermore, unlike her brother and sister, she does not talk much about her relationship and love life. So it is unclear if Camille has someone in her life.

Nevertheless, we hope that Stephanie’s baby girl, Camille Gottlieb succeeds in her life. Plus, we hope to learn more about Princess Stephanie’s kids in the coming days.