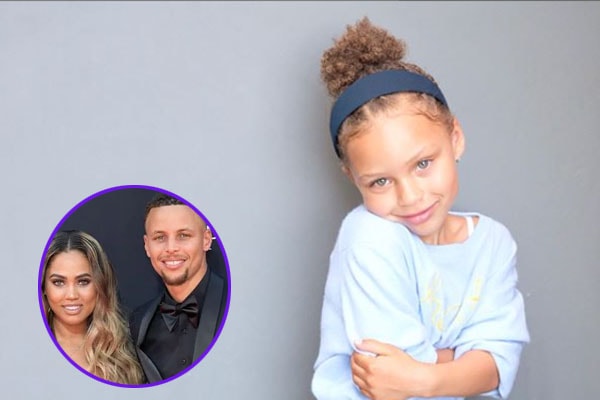 Riley Elizabeth Curry, Stephen Curry’s daughter with wife Ayesha Curry, was born on July 19, 2012, in Charlotte, North Carolina. Riley is the first child as well as the first daughter of Stephen and Ayesha Curry. They have two other children Ryan Carson Curry and Canon W. Jack Curry.

The Adorable Riley Is Everyone’s Favorite

The firstborn child of the family has an intimate relationship with their parents. So does Riley Elizabeth Curry has with her parents Stephen Curry and Ayesha Curry. Riley is gorgeous just like her mother Ayesha which is why the fans are also in love with her. Since her birth, she has been receiving all the love from the public.

MVP Stephen Curry’s daughter Riley is quite a famous celebrity baby. She first came into the spotlight and stole the heart of the fans when she was just two years old. She wanted to sit with her father in the press conference after his game. The video of her sitting in her father’s lap and waving at the camera went viral over the internet and TV channels. We can still find her videos in many YouTube channels. We are yet to figure out whose sassiness Riley inherits.

The cute Riley shares good bonding with her younger sister Ryan Carson. The Curry sisters can be seen being silly together and enjoying each other’s company. Riley and Ryan also love to watch their father’s game together. With the addition of their baby brother Canon, they are going to have so many fun moments together as they grow up together as siblings.

The name Riley has an Irish origin which means courageous. Stephen Curry’s daughter Riley has surely justified her name meaning. Likewise, Elizabeth is derived from ancient Greek which means my God is an oath. Since the couple has strong faith in God, they chose a precise name for their daughter Riley.