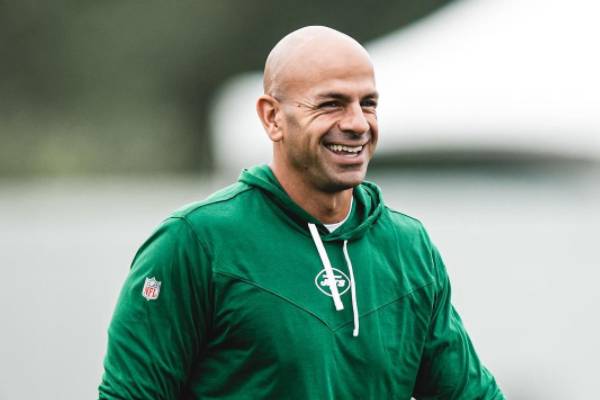 Robert Saleh's Children Prefer To Stay Hidden From The Limelight And Have Yet To Be Spotted By The Media. Image Source: The New York Jets Instagram.

Many football enthusiasts have probably heard of Robert Saleh. The National Football League’s head coach of the New York Jets is a respectable figure in the sports industry. Throughout his decade-long coaching career, Saleh has gained the admiration of many people by leading various teams to victory.

With such fame and recognition, it was only a matter of time before people began developing an interest in Robert’s personal affairs. However, unlike his professional life, the NFL coach is reluctant to discuss his personal life publicly. That being said, it is perfectly known that he is married and has a large family.

So, let us learn about Robert Saleh’s children and see how they are growing up in this article.

Robert Saleh and Sanaa Saleh tied the knot on September 7, 2007, in Texas. According to sources, the pair dated for several years before marrying in a small, intimate ceremony attended by close friends and family members.

In their decades-long marriage, the couple has welcomed seven children into their family. They have four boys, namely, Adam Saleh, Michael Saleh, Zane Saleh, and Sam Saleh. Likewise, the duo is also loving parents to two beautiful girls, Mila Saleh and Ella Saleh. Their youngest kid was born in September 2021. However, the couple has yet to reveal the name and gender of their child.

Robert and his partner are hell-bent on raising their kids away from the influence of the media. So, little about Saleh’s family is available on the internet. Robert Saleh’s children, likewise, seem to have adapted to their private way of living and have yet to be spotted by the media in daylight.

So, let us wish Saleh’s kids well and hope to learn more about them in the coming days.

Raised Primarily By Their Mother

While neither Robert nor his wife Sanna has opened up about their family, in an interview, the coach mentioned that his wife takes care of the children while he is out coaching NFL teams. He also talked about how he is grateful for his spouse and said that Sanna was his rock.

Since coaching takes him all over the country, Robert has very few chances of spending time with his family. However, after Saleh tested positive for COVID-19 in December 2021, he got to stay home.

Later, he stated that four of his children had also tested positive for the virus. Fortunately, they did not exhibit any severe symptoms but, it seems like the family managed to catch up during the difficult time. The head coach has recovered and is in good health at the moment, so we may presume that his children are doing well as well.

Robert Saleh’s kids are growing up under the influence of one of the most celebrated men in NFL history. The children also come from a long history of athletes, so it’s natural for them to be interested in sports, particularly football. So, when it comes to Robert’s family, the most frequently asked question is probably, “Will Robert Saleh’s children follow in his footsteps?”

Owing to the family’s mysterious way of life, his children’s interests remain a secret. Similarly, none of Saleh’s kids have expressed an interest in pursuing a career in athletics. As a result, the query of whether the head coach’s sons and daughters will follow in Robert’s footsteps remains unanswered for the time being.

Nonetheless, with Robert Saleh’s net worth in the millions, it is only reasonable to assume that his children enjoy a comfortable life. It looks like his wife and children are satisfied with their quiet lifestyle, so we may have to wait a long time to see the lovely family in public.

While the New York Jets’ head coach is a leading figure in football, his children may never share the limelight with him. In any case, let us wish Saleh’s children well and hope that they will be more outspoken in the coming years.

Firstly, having Hebrew origins, Adam is a name that means son of the red Earth. Similarly, the Hebrew word Zane means God’s gracious gift. Then, Michael of Hebrew origin means gift from God.

The name Sam is also of Hebrew origin and means meaning told by God. Then, Mila, derived from Milagros, which means miracles in Spanish. Finally, Ella indicates she or her and denotes girl or feminine in Spanish.