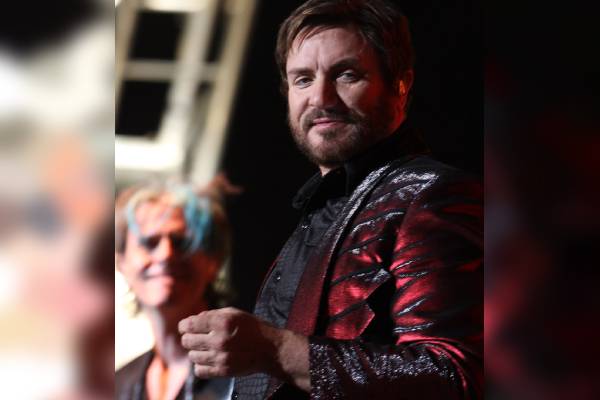 The drummer of Duran Duran Roger Taylor is a doting father of his four children. Image Source: Flickr.

If you are a fan of the new wave band Duran Duran, you won’t fail to recognize its members, including the drummer, Roger Taylor. Taylor, whose full name is Roger Andrew Taylor, is a well-known English musician who rejoined the band in 2001 after announcing his leave in 1986.

Aside from having a professional music career, the 62-year-old drummer has been married twice. He is a loving husband and a proud father of his children. Many of his fans must be curious about his young ones. Thus, we will learn more about Roger Taylor’s children.

Although it is well known that the drummer is married to his Peruvian wife, Gisella Bernales, he was previously married to Giovanna Cantone. The ex-pair had been together for around twenty-four years, from 1984 until their divorce in 2005. During their marriage, the former couple welcomed three children together.

James Taylor was born to Roger and Giovanna in the month of April as their first child and son. He, much like his father, is a musician. Moreover, he is also a part of a two-membered band named Wings of Desire, previously known as INHEAVEN.

The other band member is named Chloé Little, with whom Taylor is living together. Furthermore, James is engaged to his bandmate, Chloe. She uploaded a cute picture of themselves sharing the good news with their fans.

The lovebirds often post about each other on their social media handles. The two must be head over heels for one another.

Elliot Taylor, or Elliot D Taylor, is the second son of the musician and his former wife, Giovanna Cantone. Furthermore, Roger Taylor’s son is a professional photographer, designer, and entrepreneur. He attended Arts University Bournemouth and graduated with a bachelor’s degree in Fine Art Photography.

Elliot then began working as a freelance photographer and designer at Sunbeam Studios. Later, he became an assistant for the renowned photographer Denis O’Regan at “Moonlight Books Ltd.” Moreover, he helped Denis open his first gallery as the gallery and project manager.

Roger Taylor’s child decided to be a freelancer after working for three years. He put his experience into design and brand building for startup e-commerce brands. Eventually, he became a co-owner and founder of numerous e-commerce brands.

Aside from James and Elliot, Roger welcomed a little girl named Ellea Taylor with his ex-wife. But, Roger Taylor’s daughter prefers to stay away from the limelight.

Julian Roger Taylor Is The Youngest

After splitting up with his previous spouse, Giovanna, the drummer married his second wife, Gisella Bernales. Roger tied the knot with Gisella on the Caribbean island of St Lucia in 2007. Roger Taylor’s wife is a Peruvian national.

The couple has a child together, a son named Julian Roger Taylor. He was born on July 9, 2011, and will turn eleven in July 2022. The drummer happily shared a post on his social media handle welcoming his youngest son.

Being the youngest child of the musician, Julian Roger must have received much love from his parents and half-siblings. Duran Duran’s official Facebook page even shared an adorable picture of the musician with Julian. It was none other than Roger Taylor’s other son, Elliot, who took the photo.

Julian likely has a good relationship with his half-brothers and half-sister. Hopefully, we will get to see more interactions between the half-siblings. It seems Roger Taylor’s children are doing well on their own. We wish the 62-year-old drummer and his entire family a prosperous and happy life ahead.

Julian is a derivative name from Julianus and is a boy’s name with both Latin and Greek roots meaning “downy” and “youthful.”

Elliot is a gender-neutral name of a relatively mixed origin that bears the meaning of “the Lord is my God.” James is a biblical name that originates from the Hebrew word Jacob which means “supplanter” or “substitute.” Finally, Ellea is a name of German origin, meaning one who is foreign and true to all.