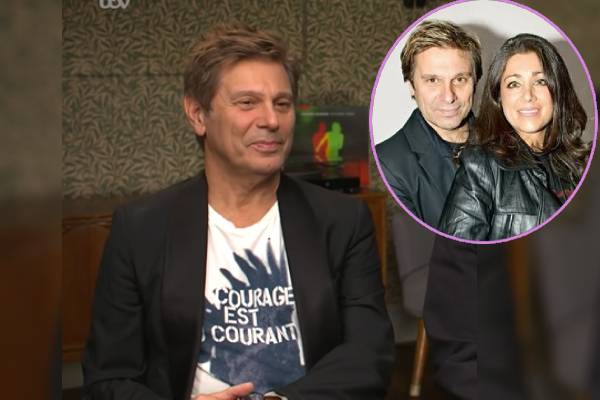 Born Roger Andrew Taylor, Roger Taylor is best known as a drummer of the famous new wave band Duran Duran. He has also been involved with many other bands like Arcadia, Freebass, and Funk Face. In addition, he was named the fifth most eligible bachelor in the UK high society magazine in 2004.

Apart from his significant career accomplishments, Roger is a married man with kids. He has been married twice. His first marriage was with Giovanna Cantone, whom he divorced in 2005. Later, the drummer married Gisella Bernales, and both are living happily together.

So, in this article, let’s get to know the talented musician’s wife, Gisella, and their love story in detail.

Who Is Roger Taylor’s wife?

Gisella Bernales came into the public attention for being the spouse of Duran Duran’s band member, Roger Taylor. She was born in the early 1970s in Peru. She is the daughter of Fernando Bernales, who is a diplomat based in Washington D.C.  Moreover, the drummer’s wife has two sisters, Giuliana Bernales and Melissa Bernales.

However, Gisella Bernales’ mother’s identity is still confidential. In addition, she has also not shared about her education degree or majors. Hopefully, she will come at ease and opens up about her personal life in the coming days.

Also Read: What Does Jonny Greenwood’s Wife Sharona Katan Do?

Roger and his spouse met in Washington D.C and started dating in 2005. They must have fallen for each other at first sight, considering how they developed such a strong bond within a short period. Soon after, they got engaged, and after about two years of their first meeting, the couple tied the knot on 12 May 2007.

The adorable couple held their romantic Caribbean wedding ceremony in Jalousie Plantation in Saint Lucia. All of their family members gathered at their nuptials. Moreover, Gisella’s two sisters and Roger Taylor’s daughter, Ellea Taylor, were present as the bridesmaids.

Furthermore, the lovebirds seem to be happy with each other. Hopefully, their relationship will last forever.

As already mentioned, the musician was previously married to Giovanna for a long time. The former couple welcomed three kids together, Ellea Taylor, Elliot Taylor, and James Taylor. After exchanging vows with the singer, Roger Taylor’s wife, Gisella, became a mother to her three stepchildren too.

Considering the fact that Ellea became a bridesmaid of her stepmother, all of Roger Taylor’s children must have congratulated him and his second wife on their wedding. Hopefully, Gisella and her stepkids are close to each other and share a close bond.

Furthermore, Roger and his current wife have also welcomed a son, Julian Roger Taylor, who was born in 2011. Although Julian was born as the first child to the Taylor-Bernales couple, he already has three amazing half-siblings to look up to.

All of the children of Roger and his ex-wife have grown up and are already living separately. On the other hand, Julian Roger is still young, and he must be enjoying his childhood to the fullest.

Is A Women Of Secrecy

Owing to her husband’s fame, Gisella has also gained considerable media exposure. Nevertheless, she is a woman who prefers to keep her life away from media scrutiny. However, the media have spotted her along with her husband occasionally.

Additionally, Gisella does not seem to be active on any social media platforms. Not only she but her famous husband also likely doesn’t have Instagram or other social media accounts. The couple must prefer to stay away from the hassle and unnecessary attention of the media. We can do nothing but respect the pair’s privacy.

Nevertheless, Roger Taylor’s wife must be doing well and living an extraordinary life along with her hubby and their child. Let’s hope she achieves great success both in her personal and professional life. We wish Gisella Bernales a beautiful future ahead.