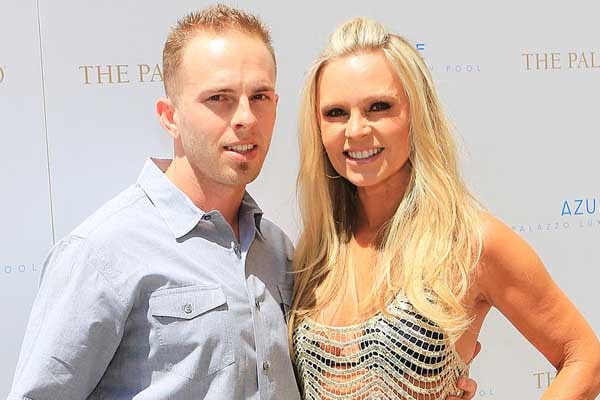 Did you know that one of the favorite housewives from the reality Tv show Real Housewives of Orange County, Tamra Judge is a proud mother of four lovely kids? She has one son Ryan Vieth from her previous marriage with Darren Vieth, whereas she had three kids with ex-husband Simon Barney.

Tamra and Simon tied their knot back on 23rd May 1998, but unfortunately, the pair separated in 2011. Together they are parents to three kids, two daughters Sophia Barney & Sidney Barney and a son Spencer Barney. Whereas Tamra is currently enjoying her marital life with her husband, Eddie Judge. Well, Tamra is a proud mother and a grandmother now, so let’s get to know a little something about her eldest son Ryan.

As mentioned above, Ryan Vieth is the eldest son of Tamra, born in 1987. If you are not familiar with the controversies associating with Ryan, then you have come to the right place, but before getting to that part, let’s get to know a little something about him.

It might come as a surprise that the eldest son of the reality Tv star is a horseman, but it’s true. If you are following Tamra on Instagram, then you might have already known that, but if you are not, then don’t worry because we are about to talk about him a lot.

Tamra Judge’s son, Ryan Vieth’s days, seem to be pretty intense as he himself mentioned that he wakes up at 4 am and starts working at 5 am then gets off at 2:30 pm. After completing his horse training, Ryan likes a little drink, then it’s time to get back to work. He then cleans his house, goes to the grocery store, and then bbq.

Ryan is usually accompanied by his daughter Ave. Yes, he is a father and a good one too. Both the father-daughter duo shares a lovely and strong bond, which can be seen in the pictures Tamra and Ryan uploads on their Instagram profile. His daughter Ave can be seen spending time alongside him on their barn watching the horses.

Furthermore, you can also find the father-daughter duo enjoying one another’s company. Plus, Ryan’s daughter Ave was the reason behind him quitting the RHOC as he wanted to raise his daughter away from the spotlight. But who is Ava’s mother, and why don’t we see the family of three together? Let’s find out more about that.

As we have mentioned above, Tamra Judge’s son was quite the topic of gossip for a long time. His controversy with his ex-girlfriend spread like a wild-fire, and most of Tamra’s fans know about that. If you aren’t aware of the whole thing that took place about a year ago, then don’t worry ‘coz we are here to talk about the whole thing in detail.

The whole thing started after Sarah Rodriguez leaked a threatening text message which was sent to her by Ryan. She took to her Instagram page and shared a screenshot of the message Ryan previously sent her. It contained some of the most disgusting and abusive text Ryan sent to his baby mama. Ryan himself said his daughter acts like a little B*tch like her mom and further continued to trash talk. When Sarah called him abusive and disgusting, Ryan reacted to her diss by allegedly telling her to go kill herself. While sending her a picture of a bullet.

It was the picture of the bullet that struck the fans. While people were making bad assumptions about the whole thing, Ryan came to his defense, mentioning that there are always two sides to every story. He further mentioned that he was keeping his mouth shut for the sake of his daughter’s well being and ‘coz he likes to keep his life as private as he can. Ryan also pointed out that he didn’t want any sympathy from the media what so ever and all of those who want to judge him for the chaos that was created by his ex-partner could feel free to contact him. Plus, he accused his baby mama of cheating on him with Dakota Meyer. He wrote on his private account that while Bristol Palin was working on her marriage, her husband was meeting up with Sarah.

In the end, Ryan mentioned he wouldn’t further continue the reality show ‘coz the money isn’t worth having such chaos around his daughter. He is a simple man and wants to live like one.

What Happened Of The Couple?

Well, the simple answer to that is the pair is no longer together, but didn’t they had a daughter together? Yes, they have a daughter named Ava Ryan together, of whom they are currently sharing joint custody.

However, things don’t go as they are planned sometimes as Tamra had to show up at Sarah’s doorstep. Why? As we have already mentioned that Ryan and Sarah are currently sharing joint custody of their daughter, but according to sources, Sarah refused to hand over her daughter to Ryan. So, mother Tamra had to intervene.

Sarah later posted a video where she mentioned that Ryan was supposed to have her daughter every other Friday at 2 o’clock until 2 o’clock the next day. But he showed up early, it was the reason she refused to hand over her daughter to him.

That said, now things are catching up as Ryan has grown to become such a loving and caring dad. We can clearly see how much of a strong bond he shares with his beloved daughter Ava. Plus, the two of them just adore spending time with one another.