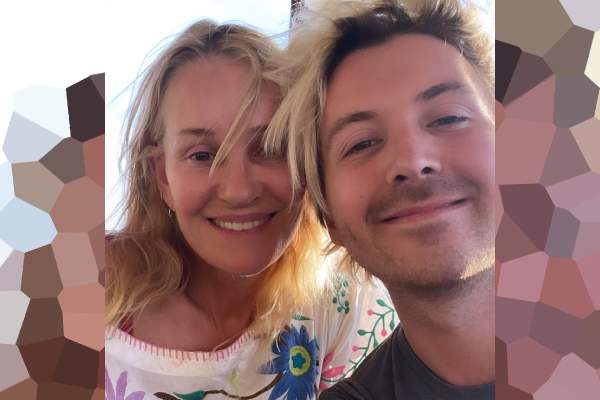 Siobhan Maire Fahey, or Siobhan Fahey, is an Ireland-born singer, actress, and composer, with a voice of vocal range of light contralto. She is well-known for being a founder and former member of the British/Irish pop girl group Bananarama. She later went on to form the award-winning alternative pop and rock duo Shakespears Sister.

Aside from being a successful singer, the 63-year-old is a proud and doting mother to her children. She has two sons who have all grown up. Many fans must be curious about her kids. Thus, we will seek to learn more about Siobhan Fahey’s son, Django Stewart.

Django Stewart was born Django James Lawless Stewart in 1991 to the Irish singer and her one-time spouse, Dave Stewart. Siobhan Fahey’s ex-husband, Dave, is an English musician, songwriter, and record producer, who is also a former member of the pop duo Eurythmics. The former couple married each other in 1987 and split up in 1996.

The ex-couple welcomed Django as their second child in London, UK. Dave Stewart’s son, Samuel Stewart, also known as Sam Stewart, was born five years before his sibling in 1987. Regardless, even though the former husband-wife duo is no longer together, we do not doubt that their sons’ arrival must have overjoyed them.

Siobhan Fahey’s Son Is A Musician

Both of Django’s parents are renowned musicians and singers. Moreover, even his older sibling has pursued a career in the music industry. So it was only natural for Dave Stewart’s son to be influenced by him and other family members. Along with his brother Sam and other members, he formed a British-American indie rock band, Nightmare and the Cat, in 2010.

Unfortunately, the band was active for only five years and disbanded on October 28, 2015. It consisted of the Stewart brothers on vocals and guitar, Claire Acey on vocals, Scott Henson on bass, and Spike Phillips on drums. Aside from Nightmare and the Cat, Django has had numerous releases as a solo artist.

In addition to his career as a musician, Siobhan Fahey’s son is also an actor. He has made appearances in a number of movies and is best known for his performance in All Ages Night (2009), Curtain Down (2017), and Pillbox (2017).

Thus, Django Stewart’s net worth must be a notable sum. Also, his mom, Siobhan Fahey, has a net worth of $12 million, and his father, Dave Stewart’s fortune is $45 million.

Is Django Stewart Dating Anyone?

As for his relationship status, the musician appears to be single at the moment. There has been no revelation of Django Stewart’s girlfriend as of now.

However, Django was previously in a relationship with the British model, Georgia May Jagger, in 2008. The couple was still dating in 2010, as per Georgia’s interview with Harper’s Bazaar. But, according to several sites, Django and the model are no longer together.

After Django’s parents went their separate ways in 1996, his mother, Siobhan, did not remarry. On the contrary, his father, Dave, found a new love. He met and married his now-wife, Anoushka Fisz, a Dutch visual artist. The lovebirds tied the knot in 2001 and have welcomed two daughters, Indya Stewart and Kaya Stewart.

Django’s half-sisters were raised in Los Angeles, California, along with him and Sam. Both his little siblings are public figures and are making a name for themselves in the entertainment industry. Born on February 28, 2000, Kaya is an EDM and pop singer-songwriter. Similarly, Dave Stewart’s other daughter, Indya, who also goes by the stage name Indya Love, is an actress, singer, and model.

Since they were raised together, the Stewart siblings must have a close relationship and enjoy spending quality time. Well, it appears Siobhan Fahey’s son is doing great by himself. We wish Django and his entire family a life full of joy and prosperity.

Django is a name for boys of Romani origin, which bears the meaning of “I awake.”