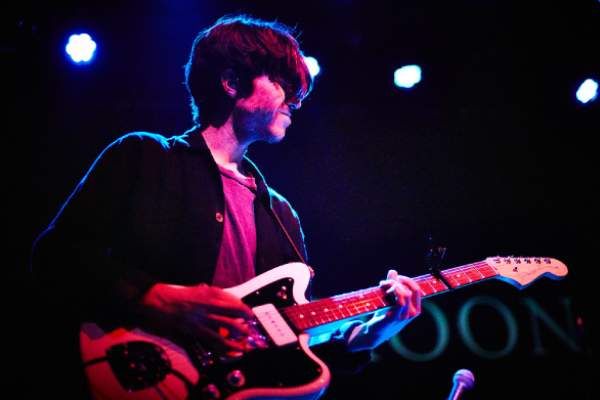 Siobhan Maire Fahey, or Siobhan Fahey, is a renowned Irish singer known for her light contralto vocal range. She was one of the founding members of the British-Irish girl group Bananarama. She left the group briefly in 1988 and went on to form the popular alternative pop and rock duo Shakespears Sister.

Besides being a successful singer, the 63-year-old is a proud and doting mother to her children. Many fans must be curious to know about her young ones. Thus, we will seek to learn more about Siobhan Fahey’s son, Sam Stewart.

In 1987, Sam was born Samuel Stewart as the eldest child to the former Bananarama member and her ex-husband, Dave Stewart. The latter is a well-known English musician, songwriter, and music producer who was a member of the famous pop duo named Eurythmics. Sam Stewart’s parents married one another in 1987, and after staying together for about eleven years, divorced in 1996.

However, the former couple welcomed two children when they were still in a marital relationship. About four years later Sam’s birth, in 1991, Dave Stewart’s second son, Django Stewart, arrived. Even though the Stewart brothers’ parents are no longer together, the ex-duo must have been overwhelmed with joy by their arrival.

Siobhan Fahey’s Son Is Also In A Band

As the title suggests, Sam is also a singer, much like his mother and father. His musician parents must have influenced him to pursue a career in the music industry. Moreover, even his little brother, Django, is releasing music as a solo artist.

Along with Django, Sam founded and formed a British-American indie rock band named Nightmare and the Cat in 2010. But, the band disbanded on October 28, 2015, after being active for about five years. Then, the Stewart brothers moved on with their activities.

Since then, Dave Stewart’s son has been releasing music as a member and guitarist of the American indie rock band from Los Angeles called Lo Moon.

Siobhan Fahey’s son became the band’s third member when he joined its lead singer, Matt Lowell, and its bassist and keyboardist, Crisanta Baker. The three of them added drummer Sterling Laws later.

Lo Moon has released two studio albums and six singles since its formation in 2016 under Columbia Records. Considerably, Sam Stewart’s net worth must be of a substantial sum. Likewise, his mother, Siobhan Fahey, has a fortune worth $12 million, and his dad, Dave Stewart’s net worth is $45 million.

Grew Up With His Half-Siblings

As already mentioned before, the Lo Moon guitarist’s parents are no longer together. After Dave and Siobhan split up in 1996, the latter did not remarry. On the contrary, the Eurythmics member moved on with his new lady love. Dave met and tied the knot with his now-wife, Anoushka Fisz, in 2001.

The couple shares two children together, both daughters. Sam’s half-sisters are named Kaya Stewart and Indya Stewart. Sam was brought up in Los Angeles, California, along with his younger brother and his little sisters.

Moreover, Dave Stewart’s daughters are also pursuing music careers and are gradually making a name for themselves. Both of the siblings are singers and songwriters. Since they were raised together and even have the same interest and professions, we assume the Stewart siblings are close to each other.

Anyway, it seems Siobhan Fahey’s son, Sam, is doing great on his own. Although he hasn’t revealed his love life, anyone who will be Sam Stewart’s girlfriend will be a lucky person. Nonetheless, we wish the guitarist and his family a successful and happy life.

Samuel is derived from a Hebrew phrase that means either “God has heard” or “name of God.”