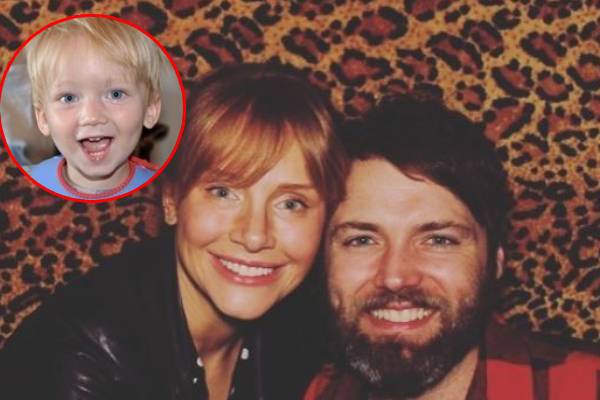 Bryce Dallas Howard is a well-known name in the entertainment industry. She came into prominence for several of her roles, including Gwen Stacy in the 2007 movie Spider-Man 3. She comes from an artistic background as her father is a superstar, and luckily, she got married to an actor.

The successful actress shares a blissful marital life with Seth Gabel, and it has already been two decades since the couple first started dating. After getting married, the married pair grew their family from two to four by welcoming a son and a daughter. Hence, without further ado, let’s see how Seth Gabel’s son, Theodore Norman Howard-Gabel, is growing up.

Seth Gabel met his then-future wife, Bryce Dallas-Howard, while they were attending New York University. Shortly after their first meeting, the celebrity duo began their relationship. Five years later, on June 17, 2006, Seth and Bryce walked down the aisle together.

The couple had planned to start their family in their thirties. But, seven days after the wedding, Seth’s wife discovered about her pregnancy. Later, the couple found out they were having a baby boy.

Ten weeks later, Theodore’s mom introduced him to the world by showing his picture on The Tonight Show with Jay Leno. He is growing up having a wonderful life with his parents and siblings.

His Mama Suffered Postpartum Depression After His Birth

A year after his dad and mom got married in a grand ceremony, Theodore was born. Unfortunately, his mom suffered post-partum depression after his birth. She had given birth to him naturally, and once she returned home from the hospital, things got worse.

Theodore Norman Howard-Gabel’s mother talked about her issue in different interviews and has also written in different newsletters. She revealed that giving birth felt nothing but breastfeeding was even more painful. Although a lactation consultant offered to help, she felt incompetent.

Theo’s mom forced herself to do everything possible so that he would consume only her breast milk without any supplementation. Furthermore, she used to call him “it” and sobbed in the shower. She would even scream at her husband and show him the behaviors which he had never experienced since they were together.

Bryce Dallas Howard visited a therapist and physician and went through a combination of homeopathic treatments to overcome her post-partum depression. Thankfully, after giving birth to her second child, she did not have these problems.

Despite initial troubles due to Bryce’s post-partum depression, Theodore is being raised in a loving household. Five years after his birth, his younger sibling was born. On January 19, 2012, Theodore’s sister, Beatrice Jean Howard-Gabel, was born.

Interestingly, Seth Gabel’s son guessed his sibling’s gender before birth. Seth and Bryce did not think anything about it until they found out about the gender in September 2011.

Nevertheless, as the elder brother, Theo must be taking care of his sister immensely.

Theo and his sister are the apples of their dad and mom’s eyes. His parents are doing great in the acting industry. He and his sister often accompany their parents on the sets of the movies that they are filming.

Furthermore, Theo is in his teen now and might be graduating high school in a few years. Well, he might be interested in the entertainment world and who knows he may follow in his parents’ footsteps. As he is in his teenage years hopefully, we will get to know about his career choice in the coming days.

Moreover, on his seventh birthday, Bryce Dallas Howard’s son got an opportunity to be with her in the movie Jurassic World. She was in the middle of shooting the film scenes and let him be an extra in the movie. The ecstatic birthday boy got to hug the dinosaur. This might be the lifetime experience for Theo.

Hopefully, we will get to see Theo in the many other movies in the future. It is not sure what he will pursue in the days to come, but let’s hope he finds success in his career.

Nevertheless, Theodore must be living a great life. His parents raised him and his sister away from the media limelight. Hopefully, we get to know more about Seth Gabel’s son in the coming days.