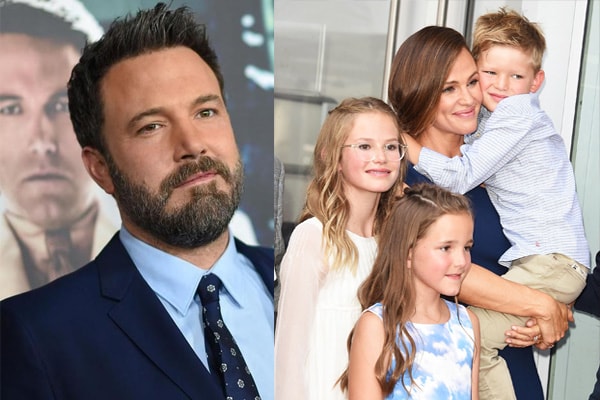 The American actress, Jennifer Garner has two daughters; Violet Affleck and Seraphina Rose Elizabeth Affleck and one son, Samuel Garner Affleck. She had the children with her ex-husband Ben Affleck.

Jennifer and Ben tied the knot in 2005. After ten years of marriage, ben and Jennifer announced their intention to divorce. In October 2018, the couple finalized their divorce. However, according to US Weekly, it was reported that Ben wants to reconcile with Jennifer.

The 13-year-old Jennifer Garner’s daughter, Violet Affleck just looks like her mother. Usually, Jennifer doesn’t make many public appearances with her daughter, Violet in the events. On the Hollywood Walk Of Fame, the Daredevil actress was honored with a star, and the event gave a rare sight of her oldest daughter Violet and other children as well.  She looks exactly like a mini-me version of Jennifer.

Even though Ben and Jennifer had an immediate separation, all three children are in good shape. The Walk Of Fame event gave us a rare chance to see her children growing up well.

Jennifer Garner’s youngest daughter, Seraphina Rose Elizabeth Affleck is ten years old. She is often spotted with her father, Ben Affleck. They were once spotted going out for lunch in Tony Los Angeles. The ex-pair of Ben and Jennifer have shared custody for their children, and both decided to co-parent their kids. It looks like they are in good terms. And as for Seraphina, she loves to hang out with her siblings.

Jennifer and her ex-husband Ben welcomed their son, Samuel Garner in 2012. Samuel really thinks that his dad Ben Affleck is the real Batman. Jennifer Garner’s ex-husband Ben shared in The Norton Show that his son tells him to go to the bat cave. One fact about Samuel is that he loves the Jimmy Fallon Show. Ben revealed that his son hasn’t missed a single show of Jimmy Fallon. Well, Jimmy must be happy for the young kid, Samuel. Jimmy himself has two lovely daughters named Frances Cole Fallon and Winnie Rose Fallon.

Jennifer Garner’s son Samuel is often spotted with his mother, Jennifer. Most of the time, she comes to school to pick up her son. It looks like the mother-son duo is spending a great time together.

Despite the couple’s separation, all three kids are having a great time as usual and growing up well.

The name Violet is originated from the French word ‘ Violette.’ It is used for the flower. Seraphina means ‘Fiery-winged’; a powerful angel. Samuel is the name of God which is originated as a surname of Hebrew.