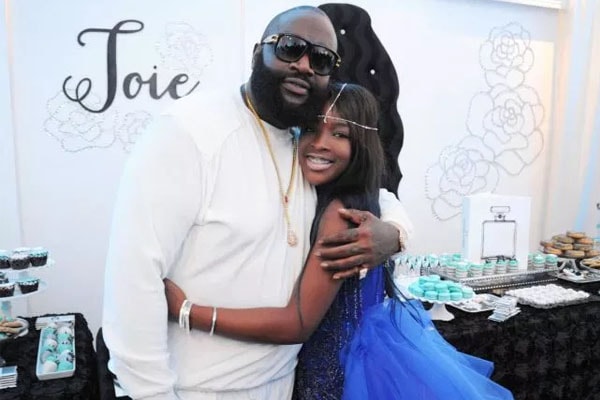 Toie is not the only child of Rick Ross. She has got other siblings too. Toie has a half-brother William Roberts III and a half-sister named Berkeley Hermes respectively. William is Rick Ross’ son with his ex-girlfriend, Tia Kemp and Berkeley with beau Briana Camille.

Toie’s father Rick Ross was once engaged with Lira Galore, unfortunately, the pair split just a couple of months after their engagement.

Thanks to Rick’s fame, his daughter Toie is also popular. Rick has bestowed his riches and popularity on his beautiful daughter too. The 16-year-old daughter of Rick Ross, Toie has got over 172K followers on her Instagram account ‘mmg_princess.’ As Rick Ross is the owner of the Maybach Music Group(MMG), Toie is literally the princess of MMG.

We know how much Rick Ross loves showing off his fortune, and his daughter is the same. It looks like Toie has got habits similar to her father, Rick. Apart from showing off her money, Rick Ross’ daughter loves wearing fashionable clothes.

The MMG Princess, Toie has got her clothing line “MMG Clothing Co.”  It is a boutique for young and stylish women to flourish with confidence. The clothing line offers not only different designed clothes but also different accessories like a mug.

If you are interested, then you can see their site and buy products yourself. Here is a list of some of the  products offered by MMG Clothing line along with their respective prices:

Whenever there are special occasions like Toie’s birthday, Rick Ross throws a huge birthday party for his daughter. Just a couple of months ago Rick threw a $100K Sweet 16 birthday bash for Toie.

The name Toie is a word from Old French origin meaning ‘Sheath.’