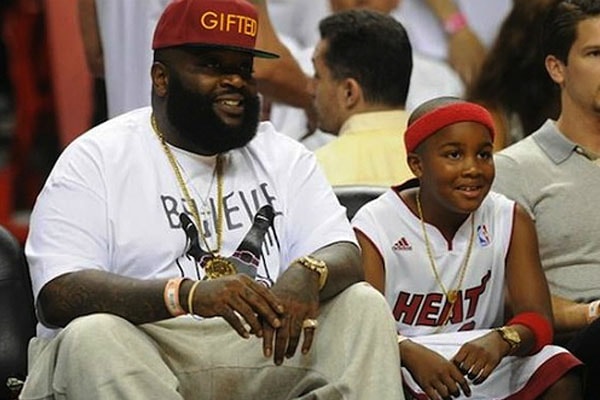 Rapper Rick Ross has got a son named William Roberts III. Till date, he is the only son of Rick Ross. As his girlfriend Brianna Camille is pregnant with his child, Rick Ross might soon welcome a new baby boy.

William Roberts III is the second child of Rick Ross. William is not the only child of  Rick Ross. He has got a half sister named Toie Roberts, Rick Ross’ daughter with ex-partner Lastonia Leviston and Berkeley Hermes, Rick Ross’ another child with ex-beau Briana.

Both Rick Ross and his son William have many things in common. Alongside having a similar body build up the father-son duo has got a liking in basketball. They are often spotted in games. And it looks like Ross has got an excellent bonding with his son William.

It must be nice to have a celebrity father as Rick Ross, and his son William sat at the courtside showing off their Rolex watches. And after the match was over, basketball player Dwayne Wade gave Rick Ross’ son his boots which just brighten up his day even more.

In 2010 Rick Ross was paying $2800 a month to his baby mama Tia as child support to his son William, but by 2015, Ross was making more dough than before. For that Tia filed a lawsuit against Ross in 2017 demanding an increase in the child support money. And it was only in 2018 that the case was finally settled.

For the moment the amount of the new child support is kept confidential, and Rick Ross will be directly depositing the money into the bank account. Well as for Rick Ross he doesn’t look very much happy related to the topic because he stated that his baby mama doesn’t need more child support but needs to get a job.

Once 50 Cent took Rick Ross’ baby mama and son for a special visit with Floyd Mayweather and now 50 Cent and Floyd have a beef going on.

The name William is of English origin which means “Resolute Protector.” And looking at Rick Ross’ son, he seems like he is strong enough to protect anyone.