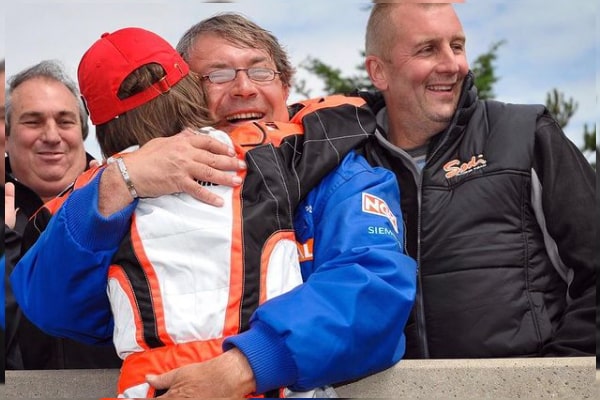 Charles Leclerc born as Charles Marc Herve Percival Leclerc to Hervé and Pascale Leclerc is a Monegasque racing driver. He is currently racing in F1 for Scuderia Ferrari and won the GP3 Series championship in 2016.

Unfortunately, the happiness of winning the FIA Formula 2 Championship in 2017 and losing his father, Hervé Leclerc, a few days earlier created an emotional whirlwind. However, regardless of the loss, Charles is determined to make his father proud.

However, Charles Leclerc’s father, Hervé Leclerc, is not just your regular dad; he is also a former racer who raced in the 90s. Hence, here is everything we need to know about Herve. Also, stick until the end to find out what lie Charles told in his father’s death bed that became true in a few years.

As mentioned earlier, Charles’s papa, Hervé Leclerc, also raced in Formula 3 during the 80s and 90s. He was a well-respected icon in the karting world despite zero wins.

Moreover, Herve played a pretty massive role in shaping his son, Charles’ career, who took him to the kart track of Philippe Bianchi. After Philippe, Jules Bianchi became Charles’ godfather, but more on that later.

According to Driver Database, Hervé Leclerc entered 22 races since his racing career debut in 1988. However, he did manage to secure 8th position at Formula 3 Monaco Grand Prix in 1988 with AA Sport.

Similarly, in 1987, Charles Leclerc’s father secured 14th position with Patrick Jamin at Monaco Grand Prix. Moreover, he teamed up with Patrick again for a few nine following races. In all the 1987 & 1988 races, Herve drove Reynard 873 Volkswagen.

Then in 1983, Herve teamed up with Ecole Avia La Chatre in Formula 3 Italy in Anson SA4 (Toyota). Likewise, in 1986 Formula 3 France, he entered the Martini MK45 (Alfa Romeo) with partner Jacky Carmignon.

After a thriving career, Charles Leclerc’s father, Hervé Leclerc, retired and started a family with Pascale Leclerc. The pair exchanged vows in an unknown timeline, and their love was very much alive till Herve breathed his last.

Moreover, Herve and Pascale welcomed three boys from their decade-long marriage, Charles Leclerc being the second.

Additionally, Herve’s youngest son, Arthur, also followed his footsteps into the karting world. The Leclerc siblings were very close to their father and had a special bond.

Charles occasionally shared pictures of his father and family, while Hervé mostly stayed away from social media. However, he was always present to witness his sons’ victories.

Moreover, Charles remembers his father has always been happy about his career choice but never pushed him to drive. Also, when asked about Hervé’s career, he revealed that he tested in F1 a couple of times, but he never had the budget. Furthermore, Herve’s son added that it was ten years before he was born, so he didn’t know much about his father’s career.

Passed Away After Long Years Of Illness

As mentioned earlier, Charles Leclerc’s papa died of an undisclosed illness in 2017. Unfortunately, he died at age 54 just four days before Charles would win the feature race at the 2017 Formula 2.

Moreover, Ferrari’s rising star, Charles, later revealed that the race was the most emotional because of Hervé’s death. Although he admitted the chaotic feelings, he still thanked his father for everything he did for him.

Charles further remembered how Herve gave him little tips for Monaco and believed he helped win the race. Apart from his father, Charles was also guided by his godfather, Jules Bianchi.

Unfortunately, Jules too died in July 2015 after a fatal crash at the Japanese Grand Prix, which led him to be in a coma for nine months. Having lost his biological father and godfather at a very young age, Charles is fueled with the passion for becoming a legend. He is one of the fastest-rising young stars in F1 and arguably the future of Ferrari.

People say when you want something; you need to manifest it, say it out loud. Well, in that manner, Herve Leclerc’s son, Charles Leclerc, made his white lie come true.

Before Herve passed away at age 54, Charles Leclerc, the rookie in the F2 season, told him that he had signed with an F1 team for the 2018 season. However, he was yet to do so.

Consequently, Charles signed with the team in December after landing a ride with Alfa Romeo Sauber for the 2018 season. Furthermore, Leclerc’s father, who died believing the lie, dreamt for his son to be in F1 and be the world champion.

Today, Charles Leclerc’s father, Herve Leclerc, must be very proud as he is regarded as the most sought-after driver in motor racing.