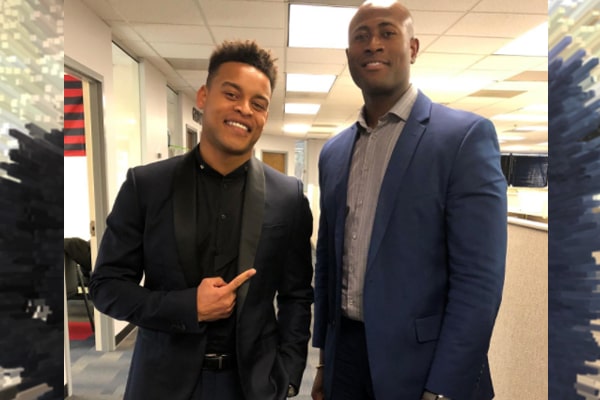 Hardly anyone can forget the emerald-eyed man with ‘to die for’ physique and exceptional talent. That’s Robert Ri’chard for you. Known for his work in the Nickelodeon sitcom Cousin Skeeter and the sitcom, One on One, Ri’chard has made a massive name for himself in the entertainment world.

However, we know very little about the people who raised him to be a successful and respectful man. Therefore, today, we shall talk about Robert Ri’chard’s parents and their whereabouts. There are a few unusual comparisons regarding his father, so we shall go through that as well. Thus, stay until the end to know.

Who Are Robert Ri’chard’s Parents?

If you have been following Robert Ri’chard, you must have known how secretive he regards his life. Although he uploads quite a few appreciation posts on his Instagram, the identity of his parents is kept confidential.

According to one of Robert’s social media post, he was born to father Andrew Robert Ri’chard and his wife. Sadly, he is very discreet about his parents, and thus, we have barely found out facts about his parents.

However, a few sites claim that his mother is a gym instructor. Sadly, Robert is yet to comment regarding his mother’s profession. Similarly, he grew up with two siblings, Christina Ri’chard and Brandon Ri’chard.

Although Robert rarely talks about his parents, he has never failed to appreciate the ladies in his life. On the occasion of the Internation Women’s day, he uploaded pictures of them on his Instagram, thanking them for raising him into a humble man.

Robert thanked his grandmother for showing the “matriarch side of heaven.” Furthermore, he grew up watching strong women as an inspiration and hence showered his gratitude towards his mother for birthing him. Ri’chard also thanked his mother for choosing his father. Likewise, he continued to thank his sister for being there for him always.

Although actor Robert Ri’chard’s parents are away from the spotlight, they support him endlessly. Besides having a separate family of his own, actor, Neal McDonough is often asked about his paternity associating Robert. But is he, though?

If you are a great fan of Star Trek, you’d probably know Neal McDonough is not Robert Ri’chard’s father. In fact, McDonough has his own family he built with his wife, Ruve McDonough. The couple exchanged their vows in 2003 and welcomed five kids throughout their marriage.

Their striking resemblance and the twenty plus years age gap also creates an illusion. However, they are not blood-related. But they work in the same industry and might have crossed paths somewhere in some manner.

However, Robert was born to his athlete father, Andrew. Although he rarely speaks of his father, he once shared a post paying a tribute. Sadly, the post is now deleted, but he had thanked his father for raising him and making him stand on the principles.

Robert further thanked his paa for loving him considerably and greatly impacted both him and his brother. Unfortunately, he decided on keeping his family’s whereabouts a secret and made his account solely professional.

But with Robert Ri’chard’s career expanding day by day, maybe we will see more of his family. His most recent project is Harlem, whose teaser included a small Nickelodeon. Robert and Meagan Good were both included in the teaser and they are best known as Nina and Bobby from the children’s sitcom Cousin Skeeter.

Likewise, Robert’s brother, Brandon, also has a privatized Instagram. Besides all the confidentiality he has managed to maintain regarding his parents, we do know Robert learned to give back to society as he grew up.

Grandfather Inspired Him To Be Philanthropic

Like Robert Ri’chard’s father, Andrew, his grandpa also played a significant role in his growth. While receiving the Diamond Award at the 6th annual awards show, Ri’chard revealed that he grew up in a household where his grandfather advised him to give much, ask less and inspire all.

Therefore, Robert now helps his community in his way and helps impoverished people. He further became a part of the Not Alone Foundation and committed to raising awareness against kidney disease.

Although not knowing much about Robert Ri’chard’s parents is a bummer, he as a person represents the value his family taught him to abide by. Nevertheless, we do hope to see them in the coming days.