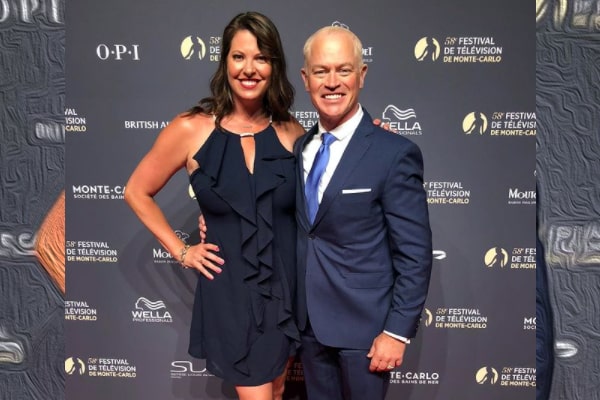 Neal McDonough is an actor and producer known for his work in the HBO miniseries Band of Brothers, Boomtown, etc. Because he refuses to do adult scenes, his career had witnessed a significant downflow.

Despite the fall, McDonough is a happy man with a beautiful wife, Ruve McDonough, and a doting father of five adorable children. We hear much about the Suits actor, but we know very little about his partner and her whereabouts.

Therefore, here is everything you need to know about Neal McDonough’s wife, Ruve McDonough. Read until the end to learn interesting facts about the McDonough couple.

Born To Pam Dreyer-Robertson and Her Husband

As mentioned earlier, Neal McDonough has made a massive name for himself as an actor, voice actor, and producer. However, his wife, Ruve, is no lesser talented than him as well.

Born to Pam Dreyer-Robertson and her husband who Neal referred to as Papa Robbie, Ruve must have had a fun childhood with her brother Ryan Robertson.

According to Robert’s Facebook, he also resides in Los Angeles. Furthermore, Ruve also seemed to be very close to her mother and wished her mother on Mother’s day in 2016.

Neal further wrote that Ruve’s father was ‘truly his other Dad!” He further notified that Papa Robbie died at age 68. Death is the ultimate end of human beings, and accepting death and embracing their memories is the fate of those who live.

Hence, Neal McDonough’s spouse, Ruve McDonough, must have embraced her father’s memories and celebrated his life.

Besides having a wonderful childhood and family, Ruve McDonough also enjoyed a successful modeling career.

Although Ruve McDonough rose to fame as Neal McDonough’s wife, she had already gained a name as Ruve Robertson, a bikini model from South Africa. Moreover, she seems to have revealed very little information about her childhood and former profession.

However, Ruve attended Empangeni High School on the east coast of South Africa. Besides, she also shared a couple of pictures of herself and her friends presumably wearing swimsuits in 2017. Unfortunately, she did not indicate when the photo was taken, but she is glowing with her friends.

Ruve has retired from her modeling career and has entered her partner’s forte, producing. Yes, according to Ruve McDonough’s IMDb, she is currently working as a producer for Boon. Likewise, she also appreciates AppleBox and has appeared in the Late Late Show with Craig Ferguson in 2005.

Standing tall at 6’3″, Ruve might as well enter into the acting world shortly after. As of now, let’s see how Ruve and Neal McDonough’s relationship blossomed.

First Met While Neal Was Filming Band Of Brothers

Do you believe in love at first sight? If not, let Neal McDonough change your mind.

The McDonough pair accidentally met in 2000 while Neal was filming Band of Brothers at the time. He further claims that he fell for Ruve the moment he first locked eyes with her. During an interview in 2004, Neal also explained that they bumped into one another on St. Patrick’s Day.

Similarly, while talking to LA Magazine, Neal also revealed that he unintentionally blurted out ‘You’re tall’ the first time he saw Ruve. In an Instagram post on March 17, 2017, Neal made a heartwarming post that started with, “17 years ago in this very blessed day of St Patrick’s Day.”

Sadly, Ruve’s husband, Neal, was in a relationship with another woman at the time. Thus he called his former girlfriend and broke up with her saying, “I’m sorry, it’s not going to work out with us anymore – I just met the woman I’m going to marry.” Ouch!

Moreover, Neal indirectly admitted that he doesn’t do the adult scenes claiming he is a religious man who puts his God and family first. As a result, they are married with five kids and almost two-decades-long marriage.

Got Hitched In December 2003

After three years of their first meet in 2000, Ruve and Neal McDonough got married on December 1, 2003. It must have been a beautiful ceremony, but their honeymoon was a BLAST. It lasted seven weeks in Cape Cod, London, South Africa, Santa Barbara, etc.

Neal, even today, appreciates his wife via his Instagram posts. On their 13th anniversary, he posted a beautiful tribute claiming he married his best friend, love, and partner in life. Ruve’s husband further thanked Lord for the greatest gift a man could ever have.

A year later, Neal’s sweetheart gave birth to Clover Elizabeth McDonough on August 5, 2011, and their youngest child, James Hamilton McDonough, was born on March 31, 2014. Well, the family of seven lives happily in LA.

Interestingly, Ruve McDonough’s husband, Neal, grew up in a big family, a family of six precisely. Thus, the McDonough house must be a vibrant place to be.

Neal McDonough’s wife Ruve McDonough is now a devoted mother and a fitness enthusiast. Therefore, we hope to hear more of her in the future and see their love blossom until they grow grey together.