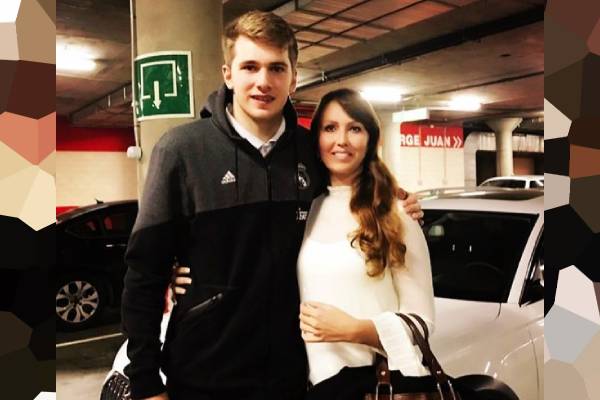 You won’t fail to recognize Luka Dončić if you are a basketball fan. He is a professional basketball player who plays for the NBA’s Dallas Mavericks. Additionally, he is a three-time NBA All-Star who also represents the Slovenian national team.

Due to the fantastic stats that the NBA star has been showing, he has been under the limelight for a long time. Moreover, even his family has unavoidably received the spotlight. If you are a new fan, you may want to know about his mother and father. Thus, we will be learning more about Luka Dončić‘s parents in this article.

Luka Doncic was born to his mother Mirjam Poterbin and his father Saša Dončić on February 28, 1999, in Ljubljana, Slovenia. Both of his parents are Slovenian; however, his dad is a Slovenian of Serbian descent from Kosovo.

Well, the details about when the pair got married to each other have not been disclosed. Regardless, Luka’s parents are divorced and live their separate lives. His mother and father filed for divorce in 2008 and fought for his custody. In the end, Mirjam was granted custody and legal guardianship of Luka.

Mirjam Poterbin Is A Former Model

The 48-year-old took part in the Miss Slovenian Konjice pageant and ended up as the 1st runner-up in 1993. Luka Dončić’s mother won the 2nd Gorenjska Preliminary Competition for Miss Slovenia and became Miss Skala 93. Additionally, she qualified for the finals of Miss Slovenia in September 1993; however, she failed to achieve a notable ranking.

Currently, Mirjam owns a webshop named LD7, which markets various products under her son’s name. She designed the first collection and later started to work with the designer. She also owns the Lumi7 Real Estate. In addition, Lumi7 also possesses the PIXI Ice Cream brand, formerly owned by Mpb4.

Furthermore, Poterbin is a representative and board member of the Foundation for Realizing Dreams, a charitable foundation owned by Robert Kristan, Luka Doncic, and Jaka Bijola. The foundation receives parts of the profits of LD7 and provides funds for talented children from economically and socially disadvantaged backgrounds.

Luka Doncic’s mother is in a romantic relationship with an entrepreneur named Boris Požeg-Pixi. He is the owner of Mpb4. The two had been friends for a long time, since the late 1990s, and eventually started dating. In 2017, Mirjam said that the couple had been together for five years. So, that means the lovebirds have been dating for around ten years now.

Saša Dončić Is A Basketball Coach

Luka must have been influenced by his father, Sasa Doncic, who also used to play the sport. Sasa is a former professional basketball player who played in several clubs in Slovenia, even playing in clubs in Serbia and France. He mostly played as a shooting guard and small forward and also played as a power forward when required.

Luka Doncic’s father is a two-time Premier A Slovenian Basketball League championship winner and a three-time Slovenian Cup winner. Furthermore, he played in the EuroLeague during the 2007–08 season.

The 47-year-old was a member of the Yugoslavia national cadet team at the 1991 FIBA Europe Under-16 Championship held in Greece. Additionally, he played two games at the FIBA EuroBasket 2005 qualification for the senior Slovenian national basketball team.

After he retired from playing basketball, Luka Doncic’s old man began his career as a basketball coach in 2010. He previously served Ilirija as their head coach from 2017 to 2022. Unfortunately, it seems he hasn’t found a new squad he wants to coach at present. Let’s hope we will see him coaching another basketball team soon.

It seems Luka Doncic’s parents are doing very well on their own. They must be very proud of what their son has accomplished. We wish a prosperous and happy life to the 23-year-old NBA star and each member of his family.