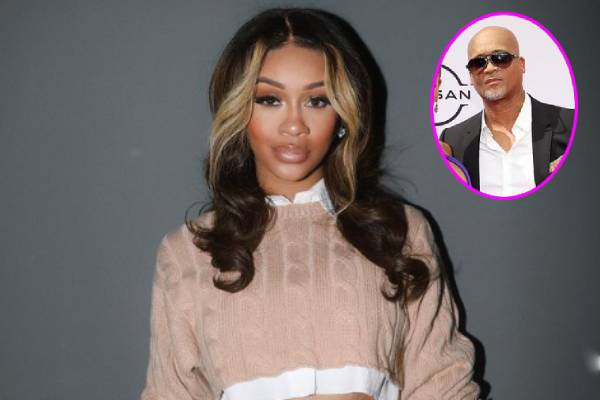 A prominent rapper and songwriter, Diamonté Quiava Valentin Harper, is professionally known as Saweetie. She is famous for her deep and heavy voice, which rhythms ideally within her trendy, sassy, and upbeat lyrics. Just within a half-decade, she has established herself as one of the most influential personas in the music industry.

As one of the few female rappers, Harper shot up to fame, attracting a lot of attention from the public. Her fans are obviously curious to know about her personal life and family members. Did you know the Icy Girl singer shares a close bond with her parents? We have already talked about her gorgeous mom, Trinidad Valentin. Thus, today’s article is about Saweetie’s father, Johnny Harper.

Is A Former Football Player

As reported by The Netline, the rapper’s loving dad is a former football player of the San Jose State. His father, Willie Harper, was also a footballer for the San Francisco 49ers. As an athlete, Johnny must have garnered a considerable sum of fortune. According to ZipRecruiter, football players will make an average of $43,989 annually in 2022. However, the former s[portsman was active a few decades ago. Even so, Johnny Harper’s net worth must have been a significant sum during his heydays.

On the other hand, Saweetie’s net worth is $4 million, which primarily benefits from her career in the music industry. Johnny Harper’s daughter also inherited the love for sports and wanted to play football. But, her grandmother discouraged her from playing. Though she couldn’t be a football star, she has now garnered imsense fame and fortune from her music.

Saweetie’s Father Is A Proud Dad Of Three

While Saweetie’s mother is of Filipino-Chinese descent, her father is African-American. Although Johnny and Trinidad have not revealed any information about their marriage date, it is safe for us to say that they have been together for about three decades. In addition, the couple shares a solid bond with each other.

During their long journey together, Johnny and his spouse welcomed three amazing children. However, the Valentin-Harper pair were still young when they welcomed their first child, Saweetie, in 1993. As a result, the former footballer’s daughter grew up with his in-laws. Moreover, a few years later, Johnny and his better half were blessed with twin girls, Maya and Milan.

Saweetie Addressed Her Dad As Her First Valentine

Johnny Harper came into the limelight for being the father of a famous rapper and songwriter. On the occasion of Valentine’s day in the year 2021, the rap queen posted her dad’s picture and addressed him as her first #valentine. The post has garnered over 400K likes and thousands of comments.

In the photo, Saweetie’s father looked so handsome that many of her fans misidentified him as her boyfriend. At the same time, others commented on how good-looking Johnny was. And indeed, the former footballer looked perfect while donning a white undershirt, a cap, and a pair of glasses.

Furthermore, Johnny and Trinidad’s little girl have always credited them for her successful career. They must have been very supportive of their kid. Moreover, the doting dad and mom must be proud of their precious daughter’s achievements. In an interview, the hip-hop artist praised her parents as hard-working people. She also added that she learned to be passionate and devoted to her work from them.

Additionally, Saweetie brought her dad, Johnny, as her date to the 21st BET Awards in June 2021. The father-daughter duo posed together on the red carpet. The rapper also tweeted a behind-the-scene picture of them with the caption: Pops with a black heart emoji.

His Baby Girl Witnessed Him Suffering Due To Racism

The talented rapper witnessed racism while growing up. Cops once pulled over her supportive dad without any reason. She saw how her superman daddy had to confine himself to be a certain type of submissiveness. Harper must have also felt bad at that time. The lovely daughter also expressed her thankfulness for modern technology and gadgets like mobile, as now everyone can witness what African-American and Asian people are going through behind the scenes.

Nonetheless, Saweetie’s father must be doing well. He seems to have earned a good fortune during his heyday. He has a beautiful family, including a devolved wife and amazing daughters. We wish Johnny Harper a happy and prosperous life ahead.