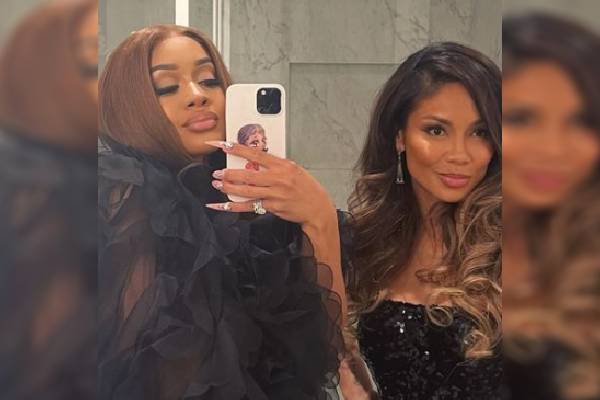 Diamonte Quiava Valentin Harper, who is professionally known as Saweetie is a famous American rapper and songwriter. The rapper is best known for her debut single “Icy Girl”. Saweetie’s deep and heavy voice within her trendy, upbeat, and sassy lyrics takes the credit for her prominence in the music industry.

The American music industry is male-dominated, but Saweetie aroused the public’s attention as one of the few female rappers. She shot up to fame attracting a lot of fans and followers. It is obvious that a lot of her fans are curious to know about her personal life and about her famous mother, Trinidad Valentin.

So, in today’s article let’s learn everything about the famous rapper Saweetie’s mother Trinidad Valentin.

Who Is Trinidad Valentin?

Trinidad Valentin (born in 1976) was one of the famous public figures of America during her heydays. But now she is additionally recognized as Saweetie’s mom. Trinidad is apparently a native of Central Valley, California, and is of Filipino-Chinese heritage.

As per Saweetie, her mom was featured in hip-hop music videos of Nelly‘s “Ride Wit Me” and DMX’s “What These Bitches Want.” In addition to that, Trinidad was also featured in some LL Cool J videos.

Trinidad welcomed her daughter, Saweetie with her husband, Johnny Harper, when she was just seventeen years old. At that time Saweetie’s father was just twenty years old. Moreover, there is not much information regarding their marriage date and the pair’s relationship. She must be keeping these details as far as possible from the media limelight.

Aforementioned, Trinidad and her husband were young when they had Saweetie. Hence, Valentin brought her girl up in Central Valley, California with the help of her mother, Saweetie’s grandmother. It is evident that Trinidad was inexperienced about bringing up a kid when she had Saweetie. And with her parent’s help, the star’s mother raised her.

After Saweetie, the rapper’s mom gave birth to a twin daughter, Maya, and Milan. Although their birth details and other information are still confidential Saweetie is a loving elder sister of her twin siblings.

It must have been hard for Trinidad to raise a child while she was still younger. But she did well and raised her girls decently with his husband by her side. Now, the family is leading a rocking life.

Trinidad Is A Great Supporter Of Saweetie

Saweetie’s mother, Trinidad Valentin has been always supportive of her career. Given that she also used to be a video model and well-versed in the entertainment industry, Valentin must have played a big role in her daughter’s career as an inspiration.

In fact, Saweetie must have grown fond of music because of her mom. But, this does not mean Trinidad supports her daughter in everything. During the release time of Saweetie’s anticipated debut album, Pretty Bitch, Trinidad disapproved of Saweetie using swear words in Tagalog, one of the languages of the Phillippines.

Trinidad cares about her girl so much and she must have been shocked how her daughter is using curse words so comfortably in her song. It just proves how much Trinidad loves her daughter Saweetie.

Although Saweetie used to share photos of her mom, Trinidad Valentin got wider attention when she appeared in Saweetie’s YouTube series where she commented about the rapper’s dress while the rapper was enjoying her time beside the swimming pool.

Looking at Trinidad’s pictures most fans may mistake her as Saweetie’s sister. Trinidad still looks young and looking at all those perfect pictures and confidence we can see where Saweetie got her look and talent from.

Recently, Trinidad presented her daughter with the “Billboard Women In Music: Game Changer” award and looked so gorgeous. Many people must have already noticed how beautiful and confident Saweetie’s mother is.

Saweetie’s mother Trinidad Valentin is still together with her husband and is a great mom of her three daughters. She must be proud of her first daughter’s achievements. We wish Saweetie and her mother successful life ahead.