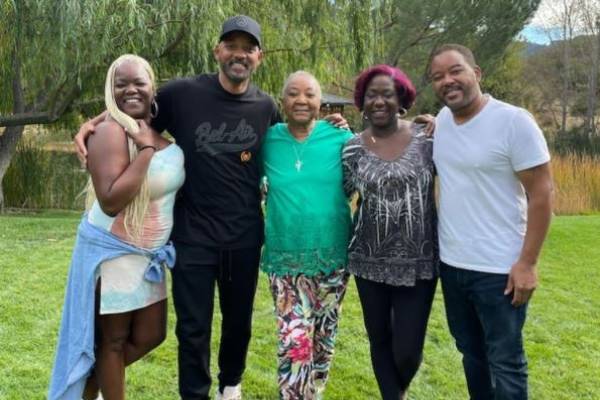 Will Smith's mother Caroline Bright has four kids along with him. Image Source: Pam's Instagram

Willard Carroll Smith II, aka Will Smith, is a famous American actor, rapper, and film producer. He is also widely popular by his stage name, The Fresh Prince. The 53-year-old actor has worked in numerous blockbuster hits like the Bad Boys, Men in Black, Enemy of the State, etc. Smith has also portrayed the great Muhammad Ali in the 2001 movie Ali. Furthermore, Will has won four Grammys, a Golden Globe Award, and four Oscar nominations for his glamorous career.

Besides his acting and music career, Will is a seriously invested family man. He has a pretty star-studded family. His wife and children are all famous among the public and media. However, his elder sibling Pamela Smith, aka Pam, isn’t talked about much in the media.

So, in today’s article, let’s get to know Will Smith’s sister Pam Smith.

Eldest Of The Smith Siblings

Pam Smith is the eldest born child of their parents. Pamela was born in 1964 to her mother, Caroline Bright, and father, Willard Carroll Smith Sr. Her brother Will was born in 1968, four years after her birth.

Similarly, Pam has twin siblings, Harry Smith and Ellen Smith, born in 1971. All the Smith siblings were born relatively close in age. They grew up together and had to endure a tough childhood. When Will Smith’s sister, Pamela was 17, their parents separated. Despite the difficult time, the brothers and sisters were always there looking out for each other.

Pam also has a half-sibling named Ashley Marie Pettway Smith from her dad’s side.

Furthermore, Pamela also has two nephews and a niece from her brother Will. Unfortunately, Pam’s sibling, Will has been through a divorce once. The superstar was married to Sheree Zampino from 1992 to 1995. He has a son Trey Smith from his first marriage.

Pam’s celebrity brother is currently married to Jada Pinkett since 1997. They have two children, Jaden Smith and Willow Smith, together. Pamela’s nephew and niece are entertainers like her brother, and she shares a close bond with all of them.

Is An Owner Of A Boutique

Will Smith’s sister Pam Smith has a boutique in Philadelphia. Besides this, we don’t have much information regarding her personal life. However, we can find her picture alongside a man named Darryl Aaron with a loving caption on her Instagram. But, we are not sure if the person is Pamela Smith’s boyfriend or husband.

Talking about her Instagram, Pam primarily advertises her boutique and its products like bags, ornaments, and hats there. However, it looks like she is also an event planner and organizer. We can find numerous posts on her Instagram where Pamela advertises boat rides and parties. Furthermore, she can be seen having a good time with her girlfriends.

Nonetheless, it looks like Pam is enjoying her life as a boutique owner. She can also be pictured traveling to various places with her ladies on her Instagram account.

Will Smith’s Sister Is Living A Quiet Life

On the other hand, Will has shared his pictures with his twin siblings on Instagram. He even compared the current image to an old one and joked about how his brother and sister still can’t take pictures after 40 years in an Instagram post. Furthermore, he wished the twins a happy birthday on his Instagram on their 50th birthday.

However, Will has not shared a picture of him and his elder sister Pam. The only images we can find of them together are from a recent family reunion. The Smith siblings all reunited to celebrate their mother’s birthday in February 2021. Moreover, Pam’s brother, Will won the Best Actor award at the 2022 Academy Awards so the family has more things to celebrate together.

However, Pam’s baby brother got banned from every event of The Academy of Motion Pictures Arts and Sciences board for 10 years. The decision came after he slapped the presenter Chris Rock, who joked about the appearance of his wife. Later, he publicly apologized and resigned from the academy.

Nonetheless, we wish Will Smith’s sister, Pam, all the best in their future endeavors.