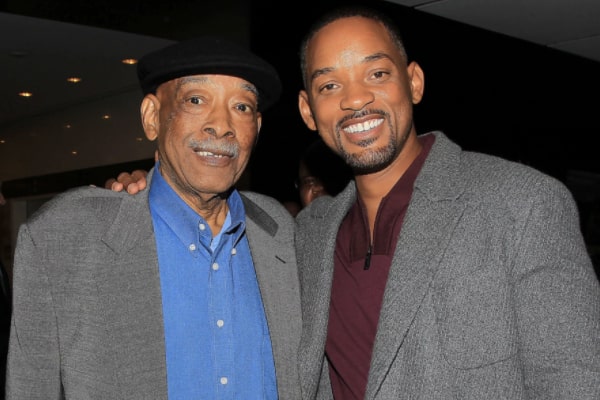 The Fresh Prince of Bel-Air superstar Will Smith had a wobbly relationship with his father. The American actor, comedian, producer, rapper, and songwriter was born to Willard Carroll Smith Sr. and Caroline Bright.

Despite having the same name as his father, the talented actor was only able to open up after his father’s death. Smith, himself a father of three, learned many life lessons from his dad, and one such was to become a better parent.

Without further ado, let’s look at Will Smith’s father, Willard Carroll Smith Sr., and get to know their relationship.

Will Smith’s father, Willard Carroll Smith, was a former U.S. Airforce veteran and a refrigeration engineer. Along with Will, Willard was the father to Pamela Smith and twins Harry Smith & Ellen Smith. Furthermore, after separating from his wife, Caroline, Willard Sr. moved on with his life and even welcomed a daughter, Ashley Marie Pettway Smith.

They all were raised baptist and resided in West Philadelphia’s Wynnefield neighborhood. Willard’s then-wife Caroline Bright worked in the School Board of Philadelphia, due to which their children had the opportunity to get proper education from the best places.

The Men in Black star’s parents separated when he was just 13 and would only divorce sometime around 2000.

Also Read: Vin Diesel’s Parents And How Much Proud They Are Of Him

Will Smith’s Father Was Abusive

The two-time Oscar nominee experienced domestic violence at an early age. The I am Legend actor considered himself a gentle kid as no one ever resorted to violence against him, but it was a different case in his household.

The former U.S. Airforce vet, William Sr., had a bit of temper, and physical aggression was approved in the family. Despite learning a lot from his father, Will Smith was also emotionally scared by his actions. Smith even poured his thoughts on his father in an episode of The Fresh Prince of Bel-Air.

The father of three opened up regarding this matter on Red Table Talk in an interview with his wife, Jada Pinkett Smith. The fresh prince recalls his father’s violence as the yin to every yang, making him who he is.

Disagrees On His Father’s Parenting Method

Will Smith’s father, Willard Carroll Smith Sr. was always questioned for his parenting method as physical abuse was “okay” in the Smith household.

It was mainly because of his army background that made him become someone like that despite being surrounded by affection from his family. The Genie actor wanted to become a better father due to his family’s state.

Smith had massive critical deficiencies against his father’s methods and wanted to correct them. When he was 10 years old, the actor-cum-rapper recalls looking at his father and thinking he could be better than him.

From Father To Grandfather

Will Smith’s father, Willard Carroll Smith Sr. may have been a bad father but was always a loving grandfather. The Gettin’ Jiggy Wit It singer is the father to Trey Smith with his ex-wife, Sheree Zampino.

With Jada Pinkett Smith, the actor had music sensations, Jaden Smith and Willow Smith. Furthermore, despite questioning his father’s methods, Will allowed his children to be around him.

Willard took this opportunity to connect with his son’s family and do good for all the wrongs he had done in the past.

Passed Away Due To Cancer

Sadly, Will Smith’s father, Willard Carroll Smith Sr. passed away on November 7, 2016, due to cancer. Willard fought for four months before departing from this world despite being given only a few weeks to live.

His death made the Bad Boys actor embrace his true self or, more like, released him to be himself. During his father’s last few days, the actor was prepping for Collateral Beauty, a film about time and death.

Nevertheless, Will Smith learned tons of lessons from his father, both good and bad. As a result, the fan-favorite Hollywood icon is a supportive dad and a loving husband because of his father.

We hope Willard Carroll Smith Sr. is proud of his son and grandchildren for what they have become and peacefully living life in immortality.