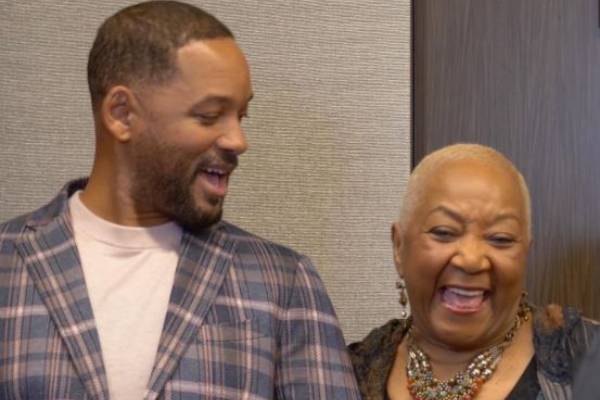 Caroline Bright is the mother of Will Smith. Image Source: Will's Instagram.

Willard Carroll Smith II, aka Will Smith, is a famous American rapper, actor, and producer. The 53-year-old first garnered public attention as an MC with hip hop artist DJ Jazzy Jeff. He is also popular by his rap name, The Fresh Prince. However, he has also acted in some of the biggest movies of this generation, like Men In Black, Bad Boys, The Pursuit of Happyness, Shark Tale, etc. The superstar has won four Grammys and a Golden Globe award for his career. Furthemore, he has also been nominated for the Academy Awards.

Besides his dynamic career, Will Smith loves to spend time with his family. He has talked about the importance of family and relationships in life. He is the second-born of his mother. Besides Will, his mom has three other kids. So, in today’s article, let’s talk about Will Smith’s mother, Caroline Bright. Has she always been supportive of her son’s career?

Will Smith’s mother, Caroline Bright, was born in January 1937 in Philadephia, Pennsylvania. Unfortunately, we couldn’t find other details regarding her childhood, and neither Will nor Bright has spoken about it. However, she worked as a school administrator in Philly.

Caroline married Will Smith’s father, Willard Carroll Smith, Sr and welcomed four children together. She gave birth to her eldest child, Pamela Smith, in 1964. She owns a boutique in Philadelphia. After four years of Pam’s birth, Caroline gave birth to Will Smith on 25th September 1968. Furthermore, she welcomed twins Harry Smith and Ellen Smith in 1971.

The Smith siblings all share a close bond and were reunited at Caroline’s birthday party. Moreover, the brothers and sisters also has a half-sibling from their father’s side. While many don’t know about Will’s little sister, Ashley Marie Pettway Smith, she is an integral part of the family.

Had An Abusive Husband

Will Smith’s mother, Caroline Bright, endured a brutal marriage as Willard Sr, treated her very harshly. In an interview, her son Will talked about that situation mentioning that he felt helpless and wanted to take his own life.

Fortunately, Will’s mom separated from his father when he was 13 years old. But, the couple’s divorce only got finalized in 2000. Sadly, her ex-husband passed away in 2016.

Recalling one of those harsh incidents, Caroline’s son Will said when he was nine years old, his father punched his mother so hard that she collapsed and started spitting blood. In retaliation, Will even wanted to kill his father and avenge his mom when he was young. But, he never had the courage and didn’t feel right to do it.

Due to the aforementioned incidents, Will shared a turbulent relationship with his dad, but he has always acknowledged Willard Sr’s presence in his life.

Shares A Loving Bond With Will

Will Smith’s mother, Caroline Bright, has a profound bond with her son. When the Bad Boys star was a young kid, Caroline read him the rhyming books of Dr. Seuss. This might have sparked his interest in rap and music. Furthermore, as a school administrator, Caroline tried to give her children the best life. She even sent Will to one of the best Catholic schools, Our Lady of Lourdes, instead of admitting him to a public school.

Nonetheless, Will has always talked about the importance and role of his mother in his life. Recently, the mother-son duo celebrated Caroline’s 85th birthday with their families. They danced together to Whitney Houston’s hit I Wanna Dance with Somebody (Who Loves Me). The actor even posted a video on his Instagram account dancing with his mom. He captioned the picture, “Let’s dance our way to 100”.

Furthermore, Will Smith’s mom, Caroline Bright, shares a close relationship with his sons and daughter. Caroline’s grandchildren Jaden Smith, Trey Smith, and Willow Smith are famous actors and musicians in the glamorous industry. She must also have a great bond with her other grandchildren.

Nevertheless, the grandmamma must be loving her life right now. We wish the Smith family all the best for their future.