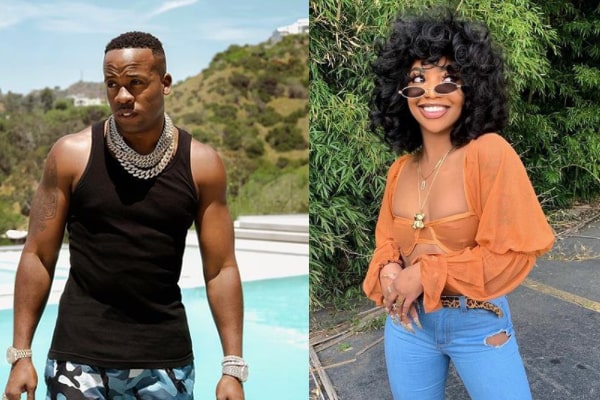 Although Taylor called Gotti her biological father via twitter, nothing is confirmed yet. Image Soure: Gotti/Taylor's Instagram.

Rapper Yo Gotti and YouTuber De’arra Taylor hail from two different entertainment industries. However, their world seemed to have crossed when she allegedly tweeted about Gotti being her biological father.

The Internet roared with rumors, speculations, and assumptions, which were only fueled by Taylor’s follow-up tweets. Therefore, let’s diagnose the question of Yo Gotti being De’arra Taylor’s dad?

Is De’arra And Yo Gotti Related?

We are all aware of the internet shenanigans, and the speculations and De’arra being Yo Gotti’s daughter are one of them. But is it true?

If you ask us, probably NO! No, Yo Gotti is not De’arra Taylor’s father, neither biological nor adoptive. There are several reports of Yo Gotti fathering only three kids from his past relationships. Moreover, De’arra, herself, is the queen of keeping her personal lives confidential.

Furthermore, Taylor’s Instagram is filled with her travel photos with her handsome beau, Ken Walker. The couple was very much loved by their fans but sadly, both announced their split in August 2021. Furthermore, she also posted a picture of her mother on the special occasion of Mother’s Day. She further thanked her for being by her side after all these years and supporting her endlessly.

De’arra also playfully uploaded a video dressing up as her mother on her YouTube channel. Unfortunately, there weren’t many details except for her fashion sense. While hearing Taylor’s mother’s choices, she must have been a fashionista during her youth.

De’arra Tweeted About Gotti Being Her Biological Father

While talking about De’arra and Yo Gotti’s relationship, there are no substantial grounds to pin their relationship. Moreover, the rumors only bulked when De’arra decided to tweet, ‘Yes, Yo Gotti is my biological dad.’

She also tweeted about being ignored by her ‘supposed’ father, which is now deleted. Although De’arra danced on her Twitter with claims, her presumed dad, Yo Gotti, has never retweeted, nor the rumors were confirmed.

While Taylor posted a picture of her mother on her Instagram, no trace of her father is spotted. Moreover, her tweet in 2015 confirmed that her mama raised her as a single parent. She once tweeted, ‘when you see your dad for the first time after he hasn’t been in your life for all 19 years’ with a laughing emoji.

Hence, following the incident until today, we could conclude that the YouTuber, De’arra and rapper, Yo Gotti do not share DNA whatsoever. Surprisingly, among the rumors and speculations, a fellow YouTuber, Zaria Mosley, was frequently asked if she and De’arra were sisters. Thankfully, Zaria denied the story; otherwise, there could have been more speculations to be busy with.

On the other hand, De’arra Tylor’s alleged daddy, Yo Gotti, is a doting father of three kids; a son and two daughters.

Aforementioned, De’arra Taylor is probably not related to rapper Yo Gotti in any manner. However, Gotti reportedly welcomed kids with his ex-wife, Lakeisha Mims. The couple was briefly married and allegedly gave birth to three children, two daughters, and a son.

Unfortunately, there aren’t many details about Yo Gotti’s children, but they enjoy luxurious vacations with him. Moreover, Gotti’s kids also accompany him on his tours. Besides being a busy businessman and rapper, Gotti manages to juggle time between work and children.

Moreover, Yo Gotti is a doting father who does not shy away from praising his kids’ achievements. On one of his Facebook posts, he celebrated his son’s hard work and appreciated him for being a delicate person.

Although Yo Gotti enjoys being in the business, he prefers to keep his little ones away from the media’s approach. Therefore, let’s hope to see them in the future. Additionally, let’s also wish to clarify if De’arra is Yo Gotti’s daughter.