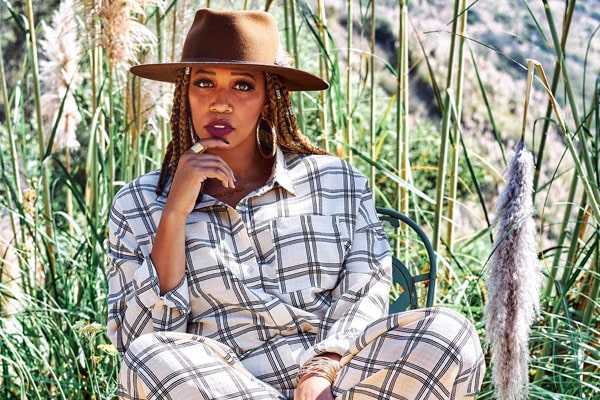 Sinbad, born David Adkins, is a household name since the 1990s. He is famous for his role as a stand-up comedian and actor in numerous films and sitcoms, including A Different World, Necessary Roughness, Houseguest, and many more. Moreover, Sinbad even had his own show on his name, ‘The Sinbad Show,’ which premiered in 1993 but was canceled after one season in 1994. Did you know Sinbad was put in a surgically induced coma after a stroke in 2020? After two years, he is now showing signs of recovery as he is gaining his walking ability.

While he has found immense success in the entertainment industry, Sinbad is also a family man. He has been married to Meredith Adkins for years and is also a proud father to two grown-up kids, Royce Beckly Adkins and Paige Adkins. Here, in this article, meet Sinbad’s daughter, Paige Adkins, who inherited his creative and artistic talents.

Sinbad’s Daughter, Paige, Is A Singer And A Songwriter

The California-born daughter of Sinbad, Paige Adkins, also known as Paige Bryan, is mainly popular for her musical ability. Adkins is a talented singer and songwriter who got attracted to music from a very early age. At the moment, the gorgeous Paige is a successful musician, and she credits her success in her career to her mom, Meredith Adkins, and dad, Sinbad.

Attending Sinbad’s 70’s Soul Music Festivals and witnessing iconic artists like Chaka Khan and The Isley Brothers paved the way for his daughter, Paige, to fall in love with music. She believes that music can change the world because it speaks to one’s heart as music is felt, not just heard.

As Sinbad’s daughter, Paige, grew up, her childhood stories and poems developed into lyrics, and after graduating from Arizona State University, she chose to pursue a career as a singer. She joined the Christian musical band ‘Press Play‘ that earned Billboard’s Top Christian Albums’ second spot in 2009. Paige’s talent took her to perform in various places, including at the Today Show and Fox and Friends. These gigs helped gained her exposure in the industry.

Sinbad’s child, Paige, released her debut album ‘Imperfect Me,’ co-written by her and songwriter Chaka Blackmon in 2010. Again in 2012, she released EP Pieces of Me with producer Swoop Brown. Since then, Paige has shared the stage with different celebrity artists such as Jennifer Hudson, Eric Benét, Macy Gray, and Erykah Badu. Unlike her father, who is best known as a stand-up comedian, Sinbad’s daughter is making a name for herself in the music industry.

The talented and beautiful daughter of Sinbad, Paige, did not just inherit her dad’s musical talent but also his acting skills. Though she is currently flourishing her career in the American Music Industry, she has some TV appearances and acting credits to her name. Sinbad’s daughter’s TV appearances include Seed of a Legend in the starring role, Friend Request as Julia, and The Mo’Nique Show

Furthermore, Paige Adkins also appeared on her family’s reality series Sinbad: It’s Just Family. She is also a writer and the star of her web-series ‘Life and Times Of a Single Angeleno (L & X).’ Currently, Paige is focused on her musical career and uses her skills to create change in society, believing that music speaks there where words fail. Watch her recently released single ‘BLM‘  above, which helped her raise money for the social justice organization, Equal Justice Initiative.

The charming daughter of Sinbad, Paige Adkins, is not single at the moment. Paige is in a relationship with actor, comedian and performer, Byron L. Hopkins for a couple of years. Hopkins proposed to Paige Adkins with an engagement ring after several years of dating in August 2019. Since then, Sinbad’s daughter, Paige Adkins is eagerly waiting for the day when she will be officially called Mrs. Hopkins.

Paige met Byron Hopkins when she was 32 years old. While talking to a podcast, Paige revealed that she dated a couple of men before finding her future husband, Byron. According to the artist, her first relationship was at the age of 17 with a 22 years old boy, which she said was her first big compromise. She was just 20 years old when she got out of that relationship. Paige finally met her true love, her soon-to-be husband, Byron, a decade later.

At the moment, Sinbad’s kid, Paige, seems happy and content with her relationship. Soon-to-be Paige Adkins’ husband, Byron, also seems to love her a lot. The romantic pair often shares photos and does not hesitate to flaunt their love via their social media handles.

Paige Adkins, aka Paige Bryan, is the firstborn of the famous entertainer Sinbad with his wife, Meredith Adkins. She has a younger brother, Royce Beckly Adkins, who is an independent filmmaker at the moment. He is also a comic book author, producer, and writer.

Paige Adkins’ brother, Royce, is the producer and director of one of the parts of her web series ‘L & X of a Single Angelino.’ He even assisted Paige on her various projects, including her latest single, ‘London Bridges‘ and songs You Gon’ Learn and Intentions. It proves the bonding between the Adkins siblings and their affinity towards the Entertainment Industry. Sinbad is undoubtedly proud of his daughter, who is making a name for herself in the music and film industry.